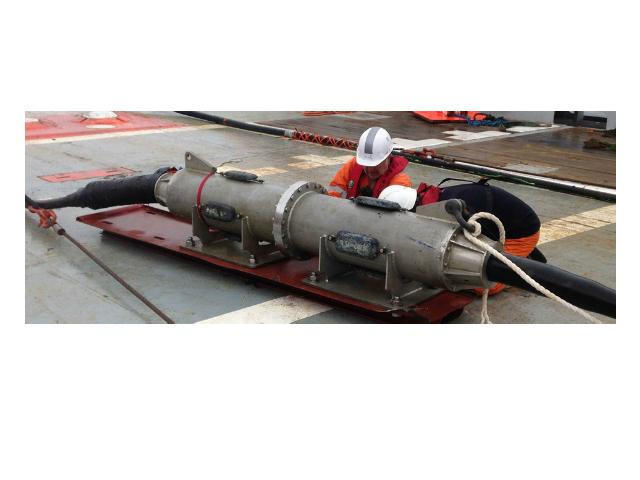 The successful operation was carried out in the Fromveur Passage, off the island of Ushant, France, and the future outcome of connecting the two halves is a coverage of 15 to 20 percent of the Ushant island’s electricity consumption needs. The ‘Sabella D10’ tidal stream turbine project includes two drymate GreenLink connectors, one linked with the turbine, the other one connected to the export cable. They are eventually lifted out of the water and connected to one another.

Over the past years, Sabella has developed an original concept for a screen of tidal turbines being positioned on the seafloor. In accordance with a permit issued by the French government, Sabella therefore plans to keep the D10 tidal turbine submerged for one year to conduct various trials.

Following the gradual increase in the speed of the Fromveur Passage currents, Sabella’s D10 tidal energy turbine has produced 10 MW/h of electricity under real operating conditions. Having been deployed last June, the turbine started delivering limited quantities of power to Ushant island in November 2015.

MacArtney ensures return of power
For successfully transmitting the harnessed tidal power to the onshore grid, the ‘Sabella D10’ relies on a purpose-built subsea connectivity solution from MacArtney. Based on MacArtney’s GreenLink Inline Termination technology the power is transmitted back to the onshore grid via the dynamic subsea export cable. The solution also comprises a couple of hang-off stress terminations, a customised flange including various medium- and low-voltage connectors for the turbine nacelle, a junction box jumper cable, and various test cables.

Pre-orientated in the direction of natural tidal currents and empowered by symmetrical rotor blades, the turbines effectively capture the energy generated by the shift between ebb and flow. The rotor is activated even by modest current motion and powers a generator, which exports the electricity produced to the onshore grid via a submarine
cable anchored and embedded at its landfall.

Commercially viable solutions
Proven and dependable, MacArtney GreenLink Inline Termination solutions are often used to connect dynamic cables from offshore renewable wind-, tidal- and wave-energy converters to export cables. In addition, they are widely used to interconnect subsea units and can be combined with the GreenLink Hub to support more devices in an array.

– SABELLA has involved MacArtney with a great challenge and in a French national premiere: the connection of a tidal power system and the first step of the USHANT Island decarbonization, says Jean François DAVIAU, President of SABELLA.

Termination of cables can take place either at cable manufacturing facilities or on site prior to cable laying. The actual mechanical connection of the two GreenLink halves takes less than two hours, making it a good solution for marine renewable applications with limited time windows, like e.g. tidal energy units.