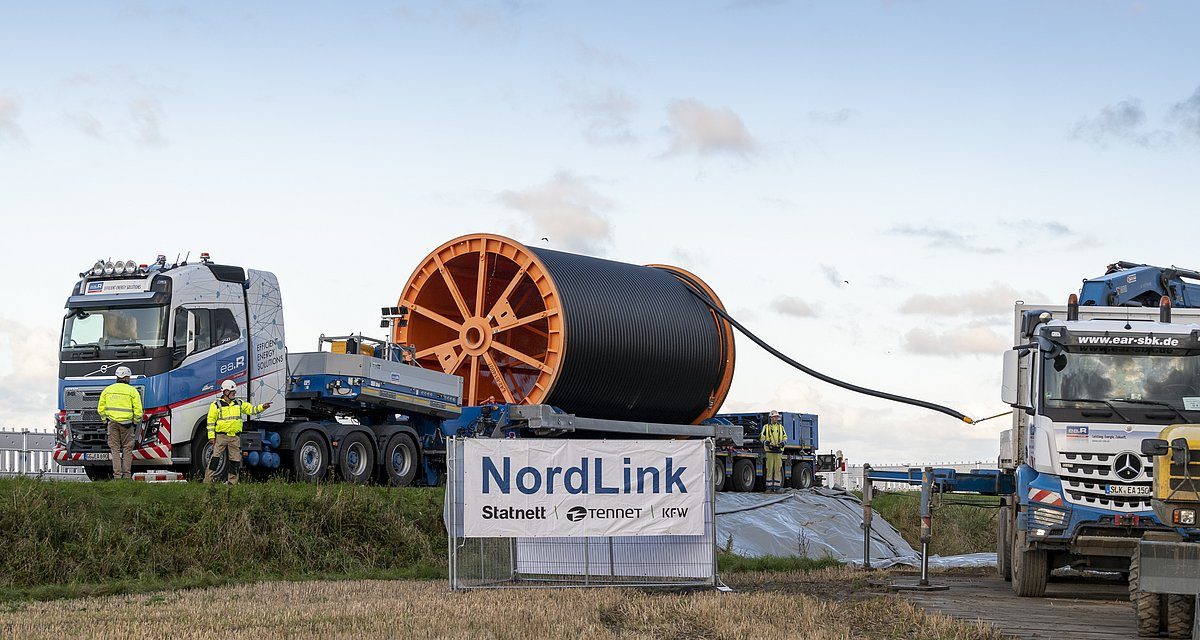 Together with its partners Statnett and KfW, TenneT today put NordLink, the Green Cable for the exchange of Norwegian hydropower and German wind energy into trial operation. This is associated with the entry of the interconnector into the European electricity market.

“NordLink is a beacon project of the energy transition and an important step in the integration of renewable energies into the electricity market”, said TenneT COO Tim Meyerjürgens. “Today, we have directly connected the electricity markets of Norway and Germany for the first time. The Green Cable is calculated to be able to supply around 3.6 million households with climate-neutral energy”, said Tim Meyerjürgens, “Norwegian hydropower and German wind energy complement each other in this system in an optimal way.”

“We are proud that our new interconnector is ready for energy exchange between our two countries. NordLink will help us achieve our climate goals and create value on both the Norwegian and German side of the cable”, said Executive Vice President Gunnar G. Løvås at Statnett.

The electricity transmission capacity that will be put on the market is the result of the latest capacity calculation of the two transmission system operators TenneT and Statnett. The available capacity of the interconnector will then be used in the context of the European market coupling of the day ahead and intraday electricity trading markets. The price difference between Norway and Germany will determine the direction of the electricity flow. It can be expected that in most cases the country exporting will be the one which just brings the lower price into the market.

In preparation for NordLink’s market entry, an international webinar was organised in November. 180 market participants from all over Europe and from different institutions and sectors, such as energy traders, power exchanges, transmission system operators, ministries, regulators and universities were given comprehensive information on market-related issues such as capacity calculation and use.

“We presented transparently how we calculate capacity, how it is offered to the market and what can be expected from NordLink in its first years of operation. We have also created a better understanding of the challenges facing transmission system operators, countries and markets when major new interconnectors come on stream,” said Tim Meyerjürgens.

Once the trial operation phase is completed, during which NordLink will go through the complex operational requirements, the Green Cable is expected to be fully tested and completed in spring 2021.

NordLink creates a link between the capacity of hydroelectric power plants in Norway and wind farms in Germany. The water reservoirs in Norway act as a kind of “energy storage”, because when electricity is imported from Germany – and especially when there is a surplus of wind energy in Germany – the water can remain in them.

Conversely, during consumption peaks and simultaneously when wind and solar energy production in Germany is low, the Norwegian “hydroelectric reservoirs” can be used to transport electricity to Germany.

German consumers can benefit from the positive effect on electricity prices by importing energy from cheap hydropower. If prices in Germany are higher than in Norway because wind turbines and solar panels produce little electricity, energy from Norwegian hydropower can be imported via NordLink.

In Norway, positive socio-economic effects will result mainly from the energy surplus due to increased production capacity. This is especially true at times when the inflow into water reservoirs is high. In dry seasons in Norway, Norwegian consumers will benefit, as sufficient electricity will then be available from German surplus wind and solar energy can be imported.

A significant part of NordLink’s socio-economic benefits will come from the revenues generated by the provision of transmission capacity to the European day-ahead and intraday market. These revenues are used, in accordance with regulatory and legal requirements, to finance network projects or to reduce electricity tariffs, among other things.

The NordLink project is being realised by a consortium in which the Norwegian transmission system operator Statnett and DC Nordseekabel GmbH & Co.KG each have a 50% stake. TenneT and KfW each hold 50% of the shares in DC Nordseekabel. DC Nordseekabel is responsible for construction and permits on the German side.

NordLink is a DC motorway without exit, i.e. a point-to-point connection, between the AC grids in Germany and Norway. Due to the length of the route and the high transmission capacity, direct current is used for low-loss transmission. The two cables (positive and negative pole) are connected to the converter stations at each end. The converter stations were installed in Wilster (Schleswig-Holstein) and Tonstad (Norway). At these sites, electricity is converted from DC to AC  (or vice versa, depending on the direction of transmission) and fed into the German or Norwegian AC grid to supply households and businesses with green electricity.