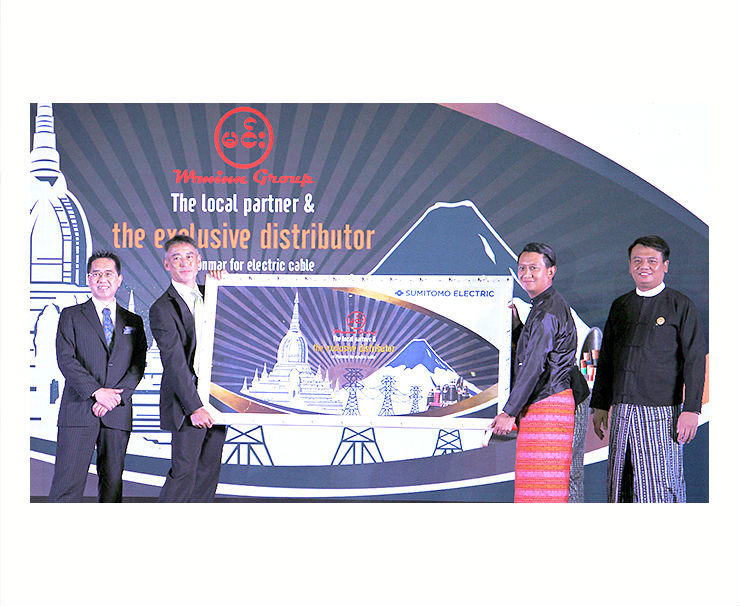 Sumitomo Electric Industries, Ltd. is pleased to announce that it has concluded a sales partnering agreement with a Myanmar company, Waminn Group of Companies (Wa Minn) for expanding the market of low- and medium-voltage cables in the country.

In the Republic of the Union of Myanmar, a new government was established in March, 2016. As investment from overseas has grown steadily, the country is expected to achieve further economic development. Meanwhile, the development of infrastructure, such as roads, ports, railroads, electric power and communications, has posed a great challenge. In the field of electric power, while Myanmar’s electrification rate is approximately 35% at present, the country plans to achieve 100% by 2030. This means that the demand for electric power is expected to grow.

Accordingly, the expectation is that the electrical infrastructure market will grow substantially in Myanmar. Taking this opportunity, Sumitomo Electric concluded in February 2016 a partnering agreement with Wa Minn, a local company, regarding the sales of low and medium voltage cables in the country. On June 18, 2016, Sumitomo Electric announced the business collaboration between the two in Yangon City, inviting approximately 350 guests from the Myanmar business community, relevant companies, the Japanese Embassy in Myanmar, andJapanese enterprises located in Myanmar. Sumitomo Electric also held a seminar for relevant organizations and companies in Mandalay, the second largest city in Myanmar.

Sumitomo Electric is determined to deepen the collaboration with Wa Minn to expand its business in Myanmar, and thereby contribute to the development of the country.