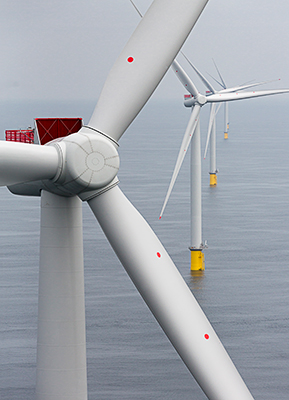 Siemens is to supply, install and commission 56 wind turbines for the Galloper Wind Farm Ltd. (GWFL) off the south-east coast of England. The owners of the offshore wind power plant are RWE, UK Green Investment Bank, Macquarie Capital and Siemens Financial Services (SFS), each with a 25 percent stake. The plant’s 336 megawatt capacity will be sufficient to supply up to 336,000 British households with clean power. Siemens will also be responsible for servicing the wind turbines for a 15-year period. The total investment costs of the Galloper project are 1.5 billion British pounds.

Siemens is to supply, install and commission 56 wind turbines for the Galloper Wind Farm Ltd. (GWFL) off the south-east coast of England. The owners of the offshore wind power plant are RWE, UK Green Investment Bank, Macquarie Capital and Siemens Financial Services (SFS), each with a 25 percent stake. The plant’s 336 megawatt capacity will be sufficient to supply up to 336,000 British households with clean power.

“We are pleased that Siemens will again be supplying the six megawatt wind turbines for an offshore wind power plant in the UK,” said Michael Hannibal, CEO Offshore of the Wind Power and Renewables Division of Siemens AG. So far, the company has already sold about 300 of its SWT-6.0-154 wind turbines to UK and German projects. “We are working hard on making the cost of power from offshore wind power plants competitive with other ways of generating electricity,” Hannibal added.

The company is working on various levers to reduce the cost of offshore wind power still further. As early as 2020, Siemens aims to have technologies available that will make it possible to generate electric power at a cost of less than 10 Euro cents per kilowatt hour. Improvements will be made not only to the wind turbines themselves; the company is also focusing on innovations in connecting the offshore installations to the grid and in servicing.

Siemens is due to start installing the 56 SWT-6.0-154 wind turbines for the Galloper project in May 2017. The wind power plant is scheduled to be fully operational by March 2018. Prompt completion is necessary so that the offshore project can still qualify for remuneration with ROC (Renewable Obligations Certificates) of the 2.5 round for public tenders.

Siemens Financial Services contributed to securing the Siemens bid by providing 25 percent of the total project equity, as well as supporting RWE with development funding in the period up to financial close. “The speed in which we achieved financial close, which included securing debt investments from a club of commercial lenders, is testament to the market’s appetite for well-structured offshore wind investments and its confidence in Siemens’ technical and financial expertise in this sector,” commented Kirk Edelman, Head of Energy Finance at Siemens Financial Services.

The Galloper offshore wind power plant is to be erected around 27 kilometers off the coast of Suffolk. The wind turbines will be constructed on monopiles in water between 27 and 36 meters deep.

Hans Bünting, CEO of RWE Innogy said: “Today’s announcement is the culmination of many months of successful negotiations with our partners and investors and shows that the UK remains a strong market for offshore renewables. We are delighted that Siemens, as well as becoming a project partner will also, through their technical division, support key aspects of the project including turbines, turbine installation and maintenance support. I look forward to working together with our partners to utilise our collective experience and expertise to realise the successful construction of Galloper wind farm.”

The Galloper project is an extension of the already on-line Greater Gabbard offshore wind farm, which has a capacity of 504 megawatts, where 140 Siemens wind turbines have been generating power for 530,000 British households since 2012.

Siemens has already erected an offshore capacity of more than 5.8 gigawatts worldwide, with two gigawatts commissioned in the last fiscal year alone. The UK is one of the major offshore markets. Siemens employs about 2,000 people across various sites in Britain in the wind business, grid connections and wind service operations. The Galloper project is set to create around 700 jobs during construction and 90 jobs once operational in the UK. It also represents a crucial milestone in the creation of a UK-based offshore wind manufacturing industry, begun with a 160 million pounds investment from Siemens in setting up a rotor blade manufacturing in Hull and continuing through job creation both by Siemens and the supply chain developing to support the clean energy industry.