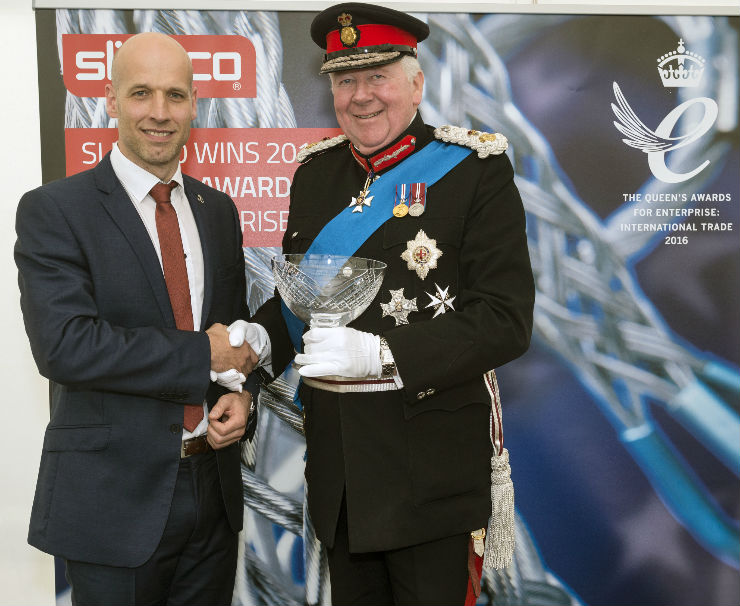 Slingco was previously honoured by winning one of the highest awards for British business: The Queen’s Award for Enterprise in International Trade in 2016

Lancashire-based design and manufacturing company, Slingco, has welcomed the county’s elite for its formal Queen’s Award presentation. The Rt Hon. The Lord Shuttleworth, Lord Lieutenant of Lancashire and Deputy Lieutenant Charles Hadcock were joined by Jake Berry, MP for Rossendale and Darwen, Councillor Madeline de Souza, the Mayor of Whitworth, the Mayor of Rossendale, Granville Morris and the Mayoress for a tour of the Slingco premises and to present the company with the Queen’s Award for Enterprise in International Trade while other attendees watched on.

Having been honoured for its work in international trade, Slingco provided drinks and refreshments for its guests before an inspiring speech by Lord Shuttleworth KG KCVO. This was followed by a talk from Slingco Managing Director, Nick Dykins, who was very quick to applaud the support, skills and commitment shown by his team that led to the Queen’s Award accolade.

Nick Dykins, Slingco Managing Director, commented: “This is one of the most memorable years in Slingco’s 36-year history. We remain humbled and immensely honoured to have won the Queen’s Award for Enterprise in International Trade and that sentiment extends to those who came to our headquarters to present the award and be part of the presentation. Though our business is global, we remain a close-knit team and we are very, very proud of the part everyone has played in helping win this award. I’d like to extend heartfelt thanks on behalf of all at Slingco to the The Rt Hon. The Lord Shuttleworth, the Mayors and MP who have helped share in this special day.”

Lord Shuttleworth added: “Slingco are the perfect representatives for the North West region when it comes to business and entrepreneurism. Their Queen’s Award success is testimony to the skills and hard work that has gone into the company since its foundation in 1980. This also demonstrates that manufacturing is alive and thriving across the region and that international export growth and expertise isn’t just restricted to areas such as the South East and London.”

Founded in 1980, Slingco has established itself as a world leader in the design, production and supply of cable installation and support products, wire rope assemblies and more, to industries as varied as oil and gas, marine/sub-sea, electrical transmission, aerospace, performing arts and construction.

The company supplies cable installation and support products to a global customer base. It initially targeted the US market in 2004, going on to expand its focus to Europe, South America, Russia and the Middle East. Headquartered in Lancashire, UK, it now has offices in the US and India, alongside sales representation in both the Middle East and Russia. The company has exported to 57 different countries in the past three years alone and exports now account for over 70% of its sales revenue, a growth in overseas earnings of 126% over the last three years.

The Queen’s Awards for Enterprise are the most prestigious accolades for businesses and individuals in the United Kingdom. Slingco attended a special reception at Buckingham Palace earlier in the year to mark their achievement.