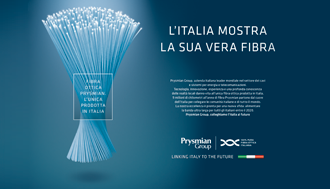 Milan, 21 September 2015 – Prysmian Group, world leader in the energy and telecom cables and systems industry, is relaunching optical fibre production in Italy and is focused on supporting the country’s development plans for the new ultra broadband telecommunication networks. The Group has completed its investment plan of almost €30 million in the centre of excellence in Battipaglia (Salerno) to boost its competitiveness and it now has some of the world’s most advanced production capability, technology and know-how.

The Prysmian Group is world leader in the sector of optical fibre cables for telecommunication networks. Overall the Group produces approximately 30 million km of optical fibre a year in the 5 plants worldwide (Italy, France, the Netherlands, the USA and Brazil), including a good 9 million km in Italy, which are bound for strategically important cabling projects throughout the world. The optical fibre plant located in Battipaglia employs about 300 highly specialised staff and is the only facility in Italy for optical fibre production.

Innovation capacities and production process efficiency are the pillars of Prysmian’s competitive optical fibre strategy. One of the most recent innovations introduced by Prysmian is the BendBrightXS 200µm fibre, which allows optical fibres to be installed inside cables with a density never achieved before. In the system innovation area, the Group is constantly developing new cabling and connectivity technologies to bring information wherever it is required (VertiCasa systems for installation in high-density buildings, VerTV for optical cabling for satellite TV, systems for installation inside pre-existing sewers, extractable fibre technologies such as Retractanet).

“Prysmian is the only fibre manufacturer in Italy. With us, the country can boast a prime leadership position in a strategic high-tech sector like optical fibres,” pointed out Hans Hoegstedt, Prysmian Italia CEO. “To illustrate how Italy has all the technologies, know-how and production capability to develop broadband telecommunication network projects, we have created a communication campaign entitled “L’Italia mostra la sua vera fibra”, which can be seen from today on the main online media. In addition, tomorrow at the Battipaglia plant we will be presenting the most recent technologies and expertise during a conference-workshop in which telecom operators and researchers will take part.”

“Thanks to the investments carried out, the Battipaglia plant is now able to compete on the world market,” explained Nicola Scafuro, Manager of Prysmian’s Battipaglia plant. “The optical fibre sector is highly globalised and there is very strong competition from Asian and American manufacturers. Prysmian is committed to doing its best to remain competitive and also to maintaining a strategic technological stronghold in Italy.”

“The New Generation Networks (NGNs) and the optical fibre used to create them are destined to become the infrastructure carrying the entire economic system, essential assets for developing the future competitiveness of Europe and, naturally, also of Italy. All services to citizens will be carried through the Network. The demand for high-quality optical fibre is therefore bound to grow exponentially in the next few years with the spread of NGNs.” The installation of optical fibres in communication networks is currently around 300 million km of fibre a year whilst in 2006 it was a mere 95 million km, confirming its position as one of the highest growth sectors in the entire industry.