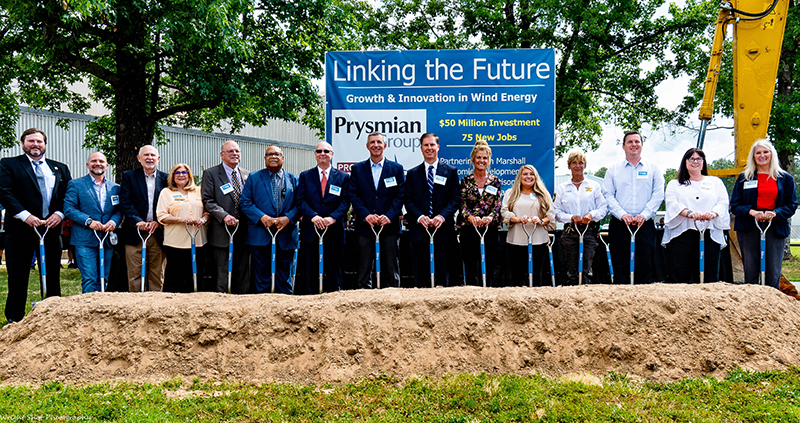 Prysmian Group has broke ground on a $50 million expansion project at its Marshall, Texas plant to support growth in the power distribution and transmission markets. Scheduled for completion in early summer of 2023, Prysmian’s $50 million investment will create 75 new jobs, expand the plant to over a million square feet and include capability upgrades.

As part of Prysmian’s original $100 million commitment made last October to upgrade plants across its North American footprint, this investment is helping to meet the need for infrastructure upgrades in the region and the growing demand for clean energy sources.

“The Marshall expansion is crucial in our commitment to developing the next-generation power distribution and transmission grids that will support the energy transition in the U.S. and Canada,” said Andrea Pirondini, CEO of Prysmian Group North America. “This investment is another step towards transforming how our region distributes and transmits power throughout North America.”

Prysmian values its role as a longtime employer in Marshall, fueling the economic growth of the region for more than 50 years. The 75 jobs will add stability to the local economy and create new employment opportunities for the community. The Marshall facility is the Group’s largest plant in North America where the bulk of the region’s renewable energy products are manufactured, and this investment also is crucial to enabling the energy transition and digital transformation across the region.

“As we grow our footprint in North America, we recognise the importance of our Marshall plant and the products that are manufactured in this facility for our customers, for energy sustainability and for the local community,” said Paul Furtado, COO of Prysmian Group North America. “This investment will not only expand our capacity and enhance our capabilities, but it will add new team members to our talented workforce and contribute to the economic growth of Marshall and the surrounding community.”

The investment comes on the heels of major project announcements for Prysmian including receiving the largest submarine cable contract in the U.S. from Dominion Energy, along with the Vineyard Offshore Wind Farm Project and the SOO Green Link Project to deliver high-voltage direct current underground transmission cables along existing railroad corridors. The Marshall expansion project significantly supports Prysmian’s growing cable system portfolio in North America and its goal of becoming the strategic partner of choice for building the U.S. clean energy grid.

Prysmian Group acquired General Cable in 2018 and expanded its North American footprint. The Marshall facility currently has more than 400 employees and will add 75 new positions including machine operators, logistics and skilled trades.

“This is a great opportunity for those who want to work for a longtime employer in the region,” said David Cooper, Marshall Plant Director. “We have a strong team here in Marshall, and I’m looking forward to seeing it expand. This investment is the beginning of big things for our community.”

Marshall has started hiring for the open positions and plans to complete the process in the fall. To learn more about the job opportunities, text MARSHALL to 866-745-6271 or visit Prysmian’s careers page.