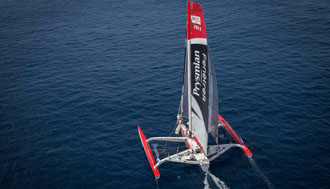 After a very successfull season, the boat sponsored by the Prysmian Group is setting out to race across the Aatlantic Ocean

Milan, 23 October 2015 – Prysmian Group, world leader in the energy and telecom cables and systems industry, will support the skipper Giancarlo Pedote in the longest course across the Atlantic Ocean, the Transat Jacques Vabre, on board the Multi50 trimaran FenêtréA-Prysmian, together with Erwan Le Roux.

The 12th edition of the Transat Jacques Vabre race will start Sunday, 25 October. The inaugural edition of the double-handed race was held in 1993, and since then it has been organised biennially on the ancient coffee route: a total of about 5,400 miles — equal to a quarter a world tour — from Le Havre, Normandy, to Itajaí, Brazil.

The 50-ft trimaran FenêtréA-Prysmian is considered one of the most competitive boats in the Multi 50 class: with its length of 15.24m and beam of 15.20m, it is deemed a perfect racing vessel built using cutting-edge technology. Thanks to its limited wet surface, it can reach 30 knots.

This is the first time Giancarlo Pedote participates in an ocean crossing on board a multihull. He is taking up this challenge after a very successful season which saw the Tuscany-born skipper and Erwan Le Roux win several races (Grand Prix Guyader, Armen Race, Grand Prix Las Palmas de Gran Canaria and the Trophy Prince de Bretagne Sud Goëlo) with their Multi50 boat. After this year’s successes this challenge can start full of expectations and hopes.

Prysmian Group’s participation and support in this new challenge testify to the fruitful collaboration that combines the values of sailing and the Group’s business mission to pursue excellence of performance, quality, competitiveness and innovation, while doing its utmost to respect the environment and use resources responsibly.