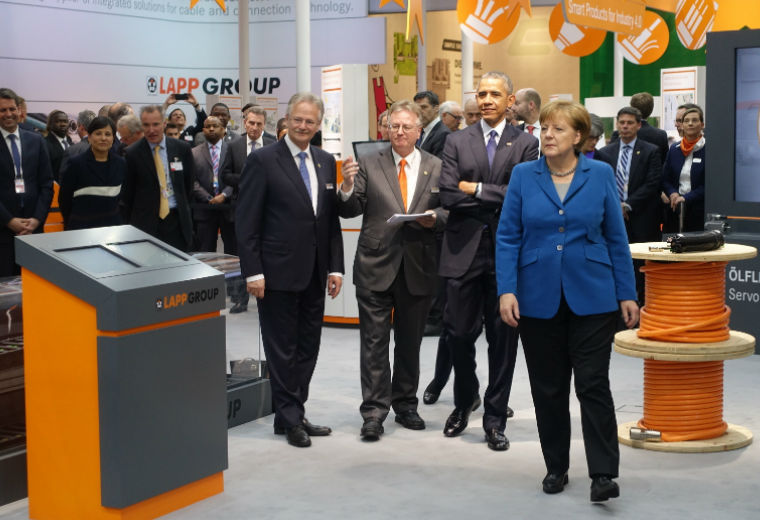 One of the major highlights at the booth was a basketball-playing robot made by Lapp’s customer Comau, which incorporates Lapp’s own ÖLFLEX® ROBOT cables.

“The ÖLFLEX® ROBOT cables, which are laid inside the robot arm, must withstand quick and precise movement under high torsion, tight bending radii and severe acceleration. Over a robot’s service life, this means that cables will be twisted 15 million times over 1400 degrees along their own axis,” explained Lapp Chairman, Andreas Lapp. “Typically, a cable cannot possibly withstand that kind of punishment but our engineers made it possible. This way, Comau can give a full eight years of warranty on their robots.”

Andreas Lapp also presented the President and the Chancellor with a set of data and power cables for robots. The escalation of the Internet of Things means that robots and other machines increasingly need to be networked. The resulting rising data volumes and challenging mechanical requirements are extremely challenging for the cables.

Lapp’s ETHERLINE® TORSION Cat.6A for example can transmit up to 10 Gigabits of data per second even under permanent twisting. “Only Lapp can deliver such complete solutions, in this we are a world market leader,” declared Andreas Lapp proudly.

Andreas Lapp accompanied his guests as they strolled through the cable specialist company’s “Walk of Fame.” The ‘walk’ featured actors dressed up as film stars Marilyn Monroe and Charlie Chaplin, in honor of this year’s partner country, the USA – and also revealed the latest highlights from the Lapp portfolio.

“I am impressed at how a family-owned business like Lapp has found international success,” said Chancellor Markel.

President Obama added: “Lapp serves as an excellent role model for US businesses.”

In conversation with President Obama, Andreas Lapp highlighted the US market’s significance for the Lapp Group: “In the USA we’ve recently experienced particularly good growth of more than 20%.”

The USA’s importance to the Lapp Group was also underlined by the fact that one of its key areas of focus at the trade fair is Lapp’s UL-certified products, which are accredited especially for use in North America.

Lapp Group’s complete connectivity solutions for industrial machine and infrastructure applications include a full suite of power and control cable, connectors, accessories and systems. These products and solutions are specifically tailored for a wide array of industries including automotive, food and beverage, wind energy, oil and gas, packaging and manufacturing.

The Lapp Group has remained in continuous family ownership since it was founded in 1959. In the 2014/15-business year, it generated consolidated revenue of 886 million euros. Lapp currently employs approximately 3,300 people across the world, has 17 production sites and over 39 sales companies. It also works in cooperation with around 100 partner companies in other countries.