Open day at Axon’: a success 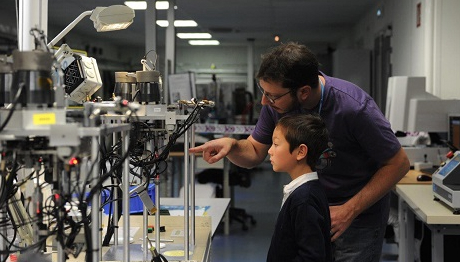 4000! That is the number of people who visited Axon’ Cable worldwide on the 19th of September in order to celebrate the 50th anniversary of the company. Many subsidiaries of the group participated in this special day: not only the factories located in Paris, Brittany and in the Champagne region but also the Latvian, Hungarian, Chinese, British, Mexican, Indian and American subsidiaries. The staff had the opportunity to present to the public an unknown activity: the manufacture of cables and cable assemblies.

With 4000 visitors including 1600 in the Champagne region, this is the biggest open door event achieved by an industrial company. Guided by motivated staff, relatives and friends, officials, journalists came to visit the workshops opened to the public: “ I had heard of Axon’ before in the newspapers, on television and radio. I am very pleased to discover many things I had never suspected. I learned a lot”, said a lady. This record attendance highlights the interest of the general public in the industry. The only regret of many visitors: “we could not visit all the manufacturing sites of Montmirail, there are so many things to discover”. Children were not outdone in this event. They were excited about being able to manufacture electrical connection. “When I grow up, I will work with Axon’” decided a 10-year aged girl. The new generation is arriving.

In addition to hundreds of French staff, the employees of the Hungarian, Latvian, Mexican, Chinese, and Indian subsidiaries played their part in the success of this day. Relatives, customers, local officials and journalists, visited the manufacturing sites abroad. Via a webcam, the subsidiaries gave an overview of their expertise to the visitors in Montmirail. Mexican and Scottish dances were also broadcast. Addix staff joined their colleagues in Montmirail after their open doors on Saturday morning.

19th September is a day dedicated to cultural heritage where museums and historical monuments are open. For Axon’, this was a good opportunity to exhibit French, Hungarian and Latvian artists. “Between the creative work of the artist and our efforts for innovation, we find a similarity in the approach, which explains without doubt that exhibitions of works of art are naturally integrated in our industrial events”. This statement made by Axon’s President and CEO Mr Joseph Puzo illustrates
the commitment of the company towards artists. Sylvain Lécrivain and his “Psychadelic Box” were very successful. Visitors discovered “ a box with an infinitely … unknown world, which is both an interior world and an another universe”.