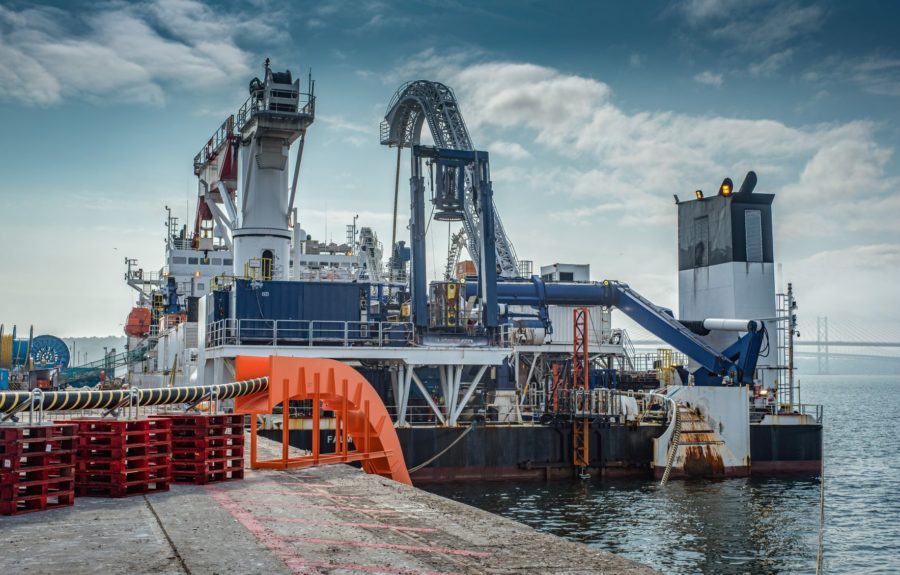 A 100-ton spare export cable for the Neart na Gaoithe (NnG) Offshore Wind Farm has arrived at the Port of Rosyth where it will be stored for a minimum of five years on a purpose-built cable carousel.

The spare cable was delivered to Rosyth by the Prysmian Powerlinks’ Cable Enterprise, a Cable Laying Vessel, where it was spooled from the vessel, along a cable highway and onto the carousel.

The Port of Rosyth, owned by Forth Ports, will provide secure quayside storage and warehousing for all the spare onshore and offshore export cables and cable accessories required for the operational phase of the NnG Windfarm.

The port will facilitate the storage of this equipment initially during the construction period and potentially for the 25-year operation life of the Windfarm.

The partnership with Forth Ports further underlines NnG’s commitment to the Scottish supply chain. NnG is now using three of the Scottish port operator’s facilities for the construction of the project with its marine hub based at the Port of Dundee and the Port of Leith operating as the project’s marine logistics base for pile casings.

NnG, jointly owned by EDF Renewables and ESB, will supply enough low carbon electricity for around 375,000* homes and has a capacity of c. 450MW of low carbon energy and will offset over 400,000 tonnes of Co2 emissions each year

Matthias Haag, NnG Project Director, said: “After a competitive tendering process we are pleased to announce the Port of Rosyth as our storage facility for our onshore and inter-array cables.

“The Port of Rosyth will provide secure warehousing and quayside storage within close proximity to the site of the wind farm and this partnership with Forth Ports is further evidence that NnG will use the Scottish supply chain wherever possible.

“Since starting offshore construction of NnG in August last year the Port of Leith has been operating as our marine logistics base for the pile casings and the Port of Dundee is where we will assemble all 54 turbines before they are installed on-site. We’re really excited that the Port of Rosyth will also now have a long-term role in the project.”

Derek Knox, Senior Port Manager at Port of Rosyth, said: “The NnG project is a major offshore renewables project for Scotland and we are pleased that the Port of Rosyth is being used for the next 25 years as secure long-term quayside storage and warehousing. Rosyth will also provide short term construction project support for NnG. Around our business, we are also playing a key role in supporting the NnG project at our ports in Leith and in Dundee.”