Nexans is ready for the European Construction Products Regulation (CPR) 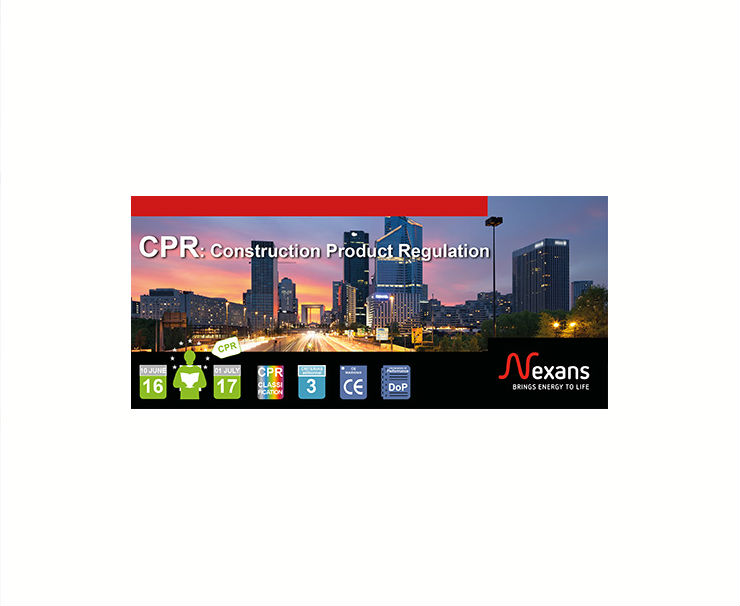 Nexans is committed to improving fire safety in buildings by redesigning its product range and preparing stakeholders for the new fire performance regulations.

Paris – July 20, 2016 – The Construction Products Regulation (CPR) came into force for cables on June 10 2016. This new regulation will coexist with the current national standards until July 1st 2017, when its application will become mandatory all across Europe. For several years, Nexans has been preparing for the regulation and promoting debate among specifiers, installers and wholesalers about the expected changes both in terms of cable performance and their new obligations. The background preparations have been done through a series of conferences, webinars and publications, as well as through intense engineering work.

The Construction Products Regulation provides a “common technical language”, offering uniform assessment methods for fire performances of construction products throughout the European Economic Area. For products that pass the assessments, the CE marking and the Declaration of Performance (DoP) certify compliance with the regulation. This puts the onus on the manufacturer to develop and supply compliant products.

It is then up to national governments within the EU to set the required level of performance for each construction category, adopting this harmonized language. Nexans will continue to support key stakeholders as the national regulations are progressively implemented across the EU countries.

Nexans’ experts have been involved in developing the CPR standards for reaction and resistance to fire since its early days. Four of Nexans’ facilities – located in Sweden, Norway, France and Germany – have focused on research and testing for CPR compliant products. Nexans has used these facilities to calibrate its product range in order to meet the new requirements imposed by the regulation. Nexans’ laboratories in France and Germany are also qualified as test facilities for some CPR Notified Bodies.

To comply with the more stringent fire performance required by CPR, Nexans has been redesigning its products and developed a new generation of high performing cables such as the ALSECURE Low Fire-Hazard range. To guarantee that all products are thoroughly tested and meet the declared Euroclasses, Nexans has implemented procedures to comply with the most demanding systems of Assessment and Verification of Constancy of Performance (AVCP). AVCP systems remove any ambiguity in product performances declared in DoPs so that end users can be certain their products meet set standards.

In addition to providing a full range of certified products – from power cables to control and communication cables – Nexans has also worked on developing customer support and help services. It has developed clear CPR labelling for its products and has created the Nexans TrackerTM – an online tool allowing direct access to the regulatory information related to the Construction Products Regulation. The Nexans TrackerTM will be available in all countries where CPR is enforced and will continue to be rolled out based on local implementation of the regulation.

Nexans will continue to assist customers, installers and specifiers with CPR compliance. To ease the transition, Nexans held conferences in Belgium and the Netherlands – respectively in 2014 and 2015 – for customers and key stakeholders, and continues to host regular webinars to help the whole supply chain comply with CPR.

Dario Giordani, European Product Manager Safety Protection at Nexans said, “We welcome the introduction of CPR. We actively participated in the development of these standards as part of Europacable. At Nexans, safety of people is paramount, and these regulations will make it much clearer to the industry whether their products comply with fire safety regulations. We have contributed to raising awareness of these regulations and developing world class products which adhere to them.”