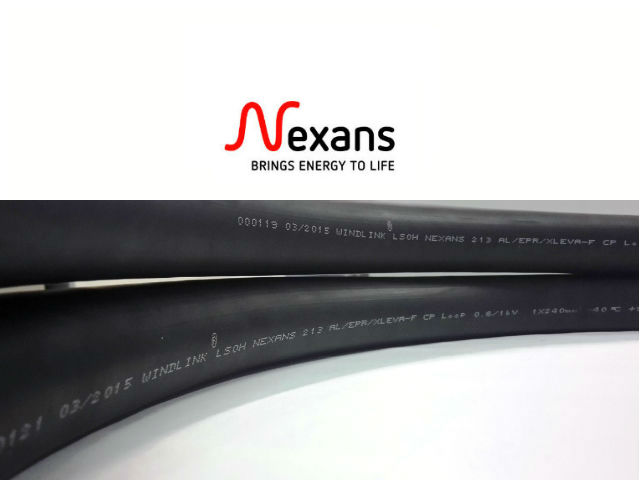 Paris, May 2, 2016 – Transportation of energy inside wind turbines is set to become more cost effective with Nexans’ new solution in low voltage aluminum loop cables and associated accessories. The flexible system, available for connections up to 1 kV, is able to withstand the torsional cycling caused by nacelles rotating according to wind direction. Through producing lighter, more flexible cable, this development highlights the cost effectiveness of wind energy on a global scale, taking the renewable energy sector a step forward in its vision of providing reliable green energy across the globe.

Nexans has developed this WINDLINK® solution, including aluminum loop cables, connectors and lugs for wind turbine generators that are lighter than traditional copper cables. This type of cable forms a loop in the nacelle so that it can withstand torsions that arise as the nacelle moves according to the wind’s direction. It then transports power down from the nacelle to the fixed section along the tower to the transformer. This new flexible aluminum loop solution complements the existing offer for lower fixed section in aluminum rigid cable.

The lower density of aluminum means that these cables are about 40% lighter than the traditional copper counterparts and therefore easier to install inside the wind turbines. The design life of the system is expected to coincide with the wind turbine generator life.

The new aluminum loop cables and their special accessories have spent three years in development, including rigorous lab testing. Nexans faced the challenge of developing flexible aluminum cables and accessories that could withstand the movement of nacelles, and were more cost effective, lighter, and flexible. Nexans tested multiple aluminum alloys to find the best performing solution. Under torsional tests, the chosen aluminum cables were able to withstand at least a torsion of ±100 degrees/meter during at least 2,000 cycles while providing the same performance as traditional copper cables. Nexans has also developed the connectors and lugs that have undergone aging testing in a third-party laboratory.

Philippe Michel, Global Product Manager, WIND OEM Industry at Nexans said, “Nexans set out to reduce the cost of low voltage loop cables while maintaining the performance needed by wind turbine generators. Our new low voltage aluminum loop solution, the first of its kind on the market, meets these criteria.”

The complete solution will be manufactured at Nexans’ Bohain plant in France and at the Hof factory in Germany.