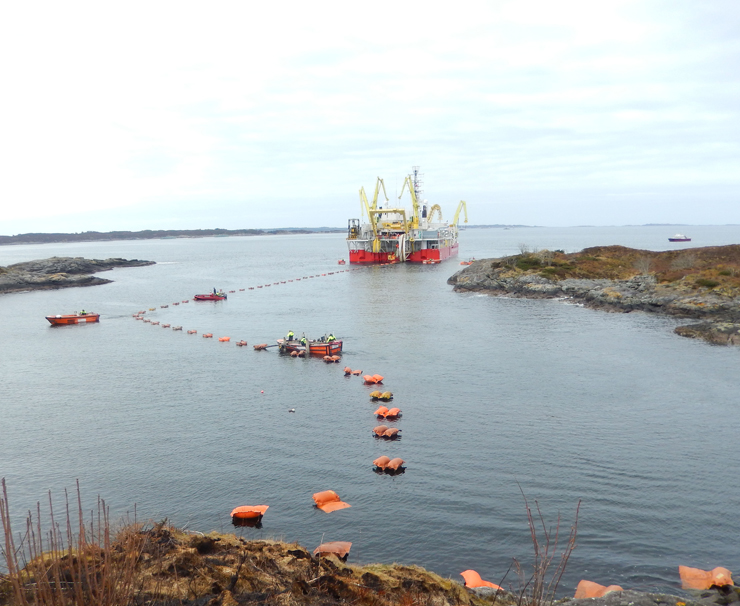 BKK Nett AS, the Norwegian power company based in Bergen, will soon be the operator of a recording breaking subsea power link as Nexans just completed a project to install the world’s longest and deepest 420 kV XLPE (cross-linked polyethylene) insulated submarine cable system. In a turnkey project worth around 75 million euros to reinforce the grid in western Norway, Nexans has delivered 90 km of 420 kV AC XLPE cable. This contract fulfills Nexans’ vision of helping to meet the growing global demand for electricity.

The new power link, comprising three single core cables in parallel, runs between Mongstad and Kollsnes, crossing two fjords: Hjeltefjorden and Lurefjorden. At its deepest point, the cables were installed at 390 m, making this both the world’s deepest 420 kV XLPE system, and longest at this depth, with a length of 22 km.

The cable system for the two fjords is manufactured, delivered and installed by Nexans. The cables were laid by Nexans’ cable laying vessel, C/S Nexans Skagerrak. In the near-shore areas, the cables were mainly protected with HDPE pipes, outer shells or trenched by water jetting.

Tom Skattum, Project Manager at Nexans Norway, said, “Achieving these new world records was a great challenge for Nexans and this contract for BKK represents the height of Nexans’ expertise in submarine power cables.”

The submarine cables have been manufactured at Nexans’ facility in Halden, Norway, and laying was completed in May 2016. This will be followed by termination work on shore, ready for the handover testing in autumn 2016.

BKK, one of Norway’s largest utility companies, is building the new connection to reinforce the power grid in the west of the country. The new power line is essential to ensure security of supply for the forecast growth in consumption by residents, businesses and industrial consumers in the Bergen region, which is an important growth area. It will also provide additional capacity for the grid connection of new generation resources.

The total length of the new 420 kV Mongstad to Kollsnes connection will be around 30 km. On land, overhead lines will carry the power. However, the majority of the route crosses two fjords, requiring the installation of the submarine cables.