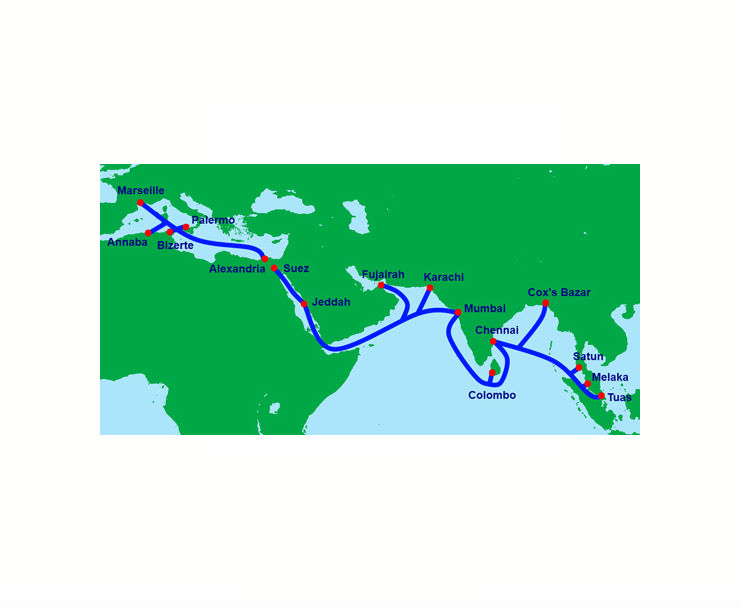 TOKYO–(BUSINESS WIRE)–Mitsubishi Electric Corporation (TOKYO:6503) announced that it will upgrade the India-Middle East-Western Europe (IMEWE) Cable System with 100gigabit per second (Gbps) dense wavelength division multiplexing (DWDM) based on a contract signed on October 4, 2015, thereby increasing the transmission capacity to 5.6Tbps. The upgrade, which will involve installing submarine line terminal equipment (SLTE) and terrestrial line terminal equipment (TLTE) in eight countries, is expected to be completed by the second quarter of 2016.

The IMEWE Cable System, which was commissioned in 2010 as a 10Gbps DWDM system, is an ultra-high capacity fiber optic submarine cable system which links India to Europe via the Middle East. The system is approximately 12,000 kilometers long and includes 10 terminal stations owned by a consortium of nine leading telecom operators in eight countries: India, Pakistan, UAE, Saudi Arabia, Egypt, Lebanon, Italy and France. The cable system comprises three optical fiber pairs with two fiber pairs on an express path, plus a terrestrial link connecting the cities of Alexandria and Suez in Egypt. Mitsubishi Electric previously upgraded the system in 2012 with 40Gbps DWDM, the latest technology available at the time.

Mitsubishi Electric will deliver new MF-11200GWS Submarine Line Terminal Equipment (SLTE) and Terrestrial Line Terminal Equipment (TLTE) with superior coherent technology to all 10 landing stations. In addition to a drastic increase in the ultimate capacity, Mitsubishi Electric has also been able to double the data capacity per rack and improve the total power consumption per cable station.