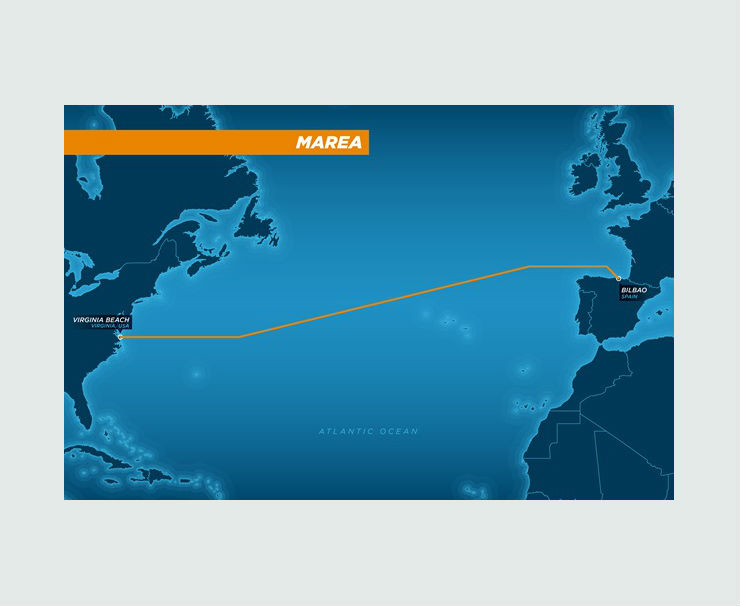 Microsoft and Facebook have announced an agreement to build a new, state-of-the-art subsea cable across the Atlantic. The new “MAREA” cable will help meet the growing customer demand for high speed, reliable connections for cloud and online services for Microsoft, Facebook and their customers. The parties have cleared conditions to go Contract-In-Force (CIF) with their plans, and construction of the cable will commence in August 2016 with completion expected in October 2017.

Microsoft and Facebook are collaborating on this system to accelerate the development of the next-generation of Internet infrastructure and support the explosion of data consumption and rapid growth of their respective cloud and online services. MAREA will be the highest-capacity subsea cable to ever cross the Atlantic – eight fiber pairs and an initial estimated design capacity of 160Tbps. The new 6,600 km submarine cable system, to be operated and managed by Telxius, Telefónica’s new telecommunications infrastructure company, will also be the first to connect the United States to southern Europe, from the data hub of Northern Virginia to Bilbao, Spain and then to network hubs in Europe, Africa, the Middle East and Asia. This route is south of other transatlantic cable systems, thereby helping ensure more resilient and reliable connections for customers in the United States, Europe, and beyond.

Microsoft and Facebook designed MAREA to be interoperable with a variety of networking equipment. This new “open” design brings significant benefits for customers: lower costs and easier equipment upgrades which leads to faster growth in bandwidth rates since the system can evolve at the pace of optical technology innovation.

Microsoft and Facebook are working with Telxius to build upon Telefónica’s longstanding experience in subsea cables on this innovative new system. Telxius will serve as the operator of the system and sell capacity as part of their wholesale infrastructure business.