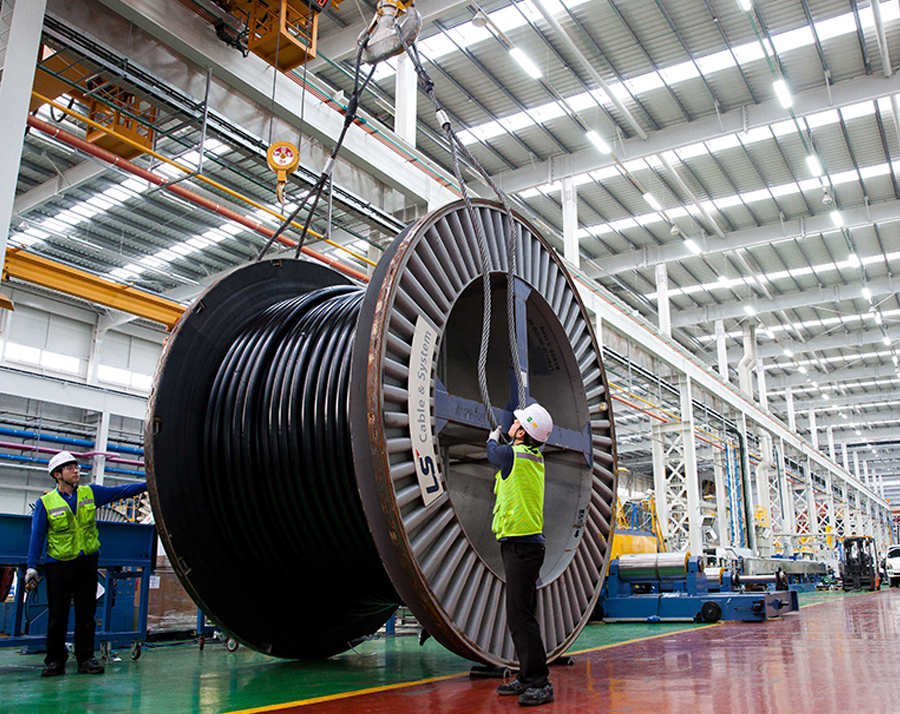 This project is for the stable supply of power to industrial complexes in the metropolitan area by connecting the 35km distance from the power plant in Seohaean Chungnam to Pyeongtaek, Gyeonggi-do.

With a single HVDC line, 3GW of power can be transmitted, which is equal to the power generated from three nuclear power plants. This is the world’s largest power transmission capacity and is 4.5 times more than current HVAC (high voltage alternating current) cable.

During the past century that electricity has been used, most of power networks across the globe have been based on alternating current. However, the key benefit of direct current having less transmission loss has been standing out recently. This explains why HVDC cables are increasingly being applied, especially for long distance transmission networks.

This is the fourth project in the domestic HVDC market since European cables were first installed between Haenam and Jeju in 1997. That was before cables were developed in Korea. Since then, LS C&S has obtained the following second, third and fourth projects.

President & CEO Roe-hyun Myung of LS C&S said, “Korea is leading the global next-generation power business with HVDC and hyper-conductive cables, fueled by KEPCO’s energy efficiency business. Based on our technological independence achieved in Korea, we will actively expand our overseas markets.”

All across the globe, only LS C&S and five companies in Europe and Japan possess HVDC cable technology. The company explained that the cables are in the early stage of commercialization, so not many companies possess both the technology and construction capabilities.

LS C&S succeeded in technological development in 2012, closing the thirty-year gap with advanced companies. Now it’s leading the industry by receiving the world’s first certification in 2018 and entering a cable supply contract for a project to supply cables boasting the world’s largest transmission capacity.

HVDC also minimizes negative environmental impacts as it produces no electromagnetic waves meaning that the size and number of substations and transmission towers can be reduced. Also, the increase of various direct current energy sources, such as the connection of power networks among countries and continents, marine wind power, photovoltaic and fuel batteries, is also leading the growth of the HVDC market.

In particular, the power network of the entire European continent is being connected, while long-distance transmission is being made in large countries such as China, India, and Brazil, and the connection of new renewable energy complexes such as the marine wind power generation complex in Europe, and the photovoltaic generation complex in Sahara, Africa is being actively pursued.