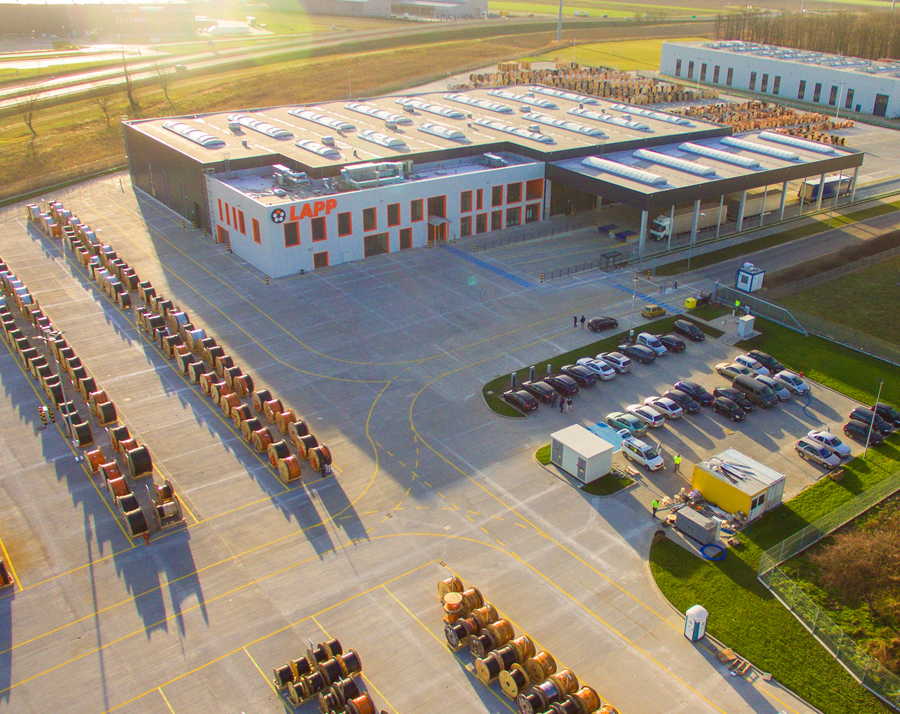 After just under a year of construction, the new LAPP logistics centre for infrastructure pipelines in Poland near Wrocław (formerly Wroclaw) started operations at the beginning of November. The world market leader for integrated solutions in cable and connection technology keeps articles on large drums available there on a total storage area of over 90,000 square metres. This enables customers from the construction, energy and plant engineering industries to be served faster and better. The new logistics center allows LAPP to provide more volume at short notice and offers enough space to better meet individual customer requirements. LAPP can thus fulfil large orders at short notice even more quickly and flexibly. “With the new logistics concept in Poland, we at LAPP are also adapting our processes and offers for customer needs outside our existing main customer group of mechanical engineering”, says Boris Katic, who as CTO at LAPP is also responsible for logistics. “We see a rapidly growing demand for the products and services needed for large construction and infrastructure projects. The new logistics concept takes this into account by improving product availability through increased storage capacity.”

The decision for the location in Wroclaw was made due to the good infrastructure there. Several larger logistics centres for various companies are already located near the new LAPP site, directly next to the Polish LAPP sales branch. Accordingly, the transport connections there are very good. This enables LAPP to offer comprehensive logistics services – regardless of whether the goods are shipped to China or to customers in Europe. Several articles from other locations can also be consolidated into one shipment.

Growth through relief of previous locations

The new logistics centre will also relieve the previous German locations by removing products on large drums and thus freeing up space. This allows them to focus on their special segments and also optimize their offerings for their customers there. “I am delighted that the construction was completed so quickly and that we can put the logistics hub into operation in the 2019/20 financial year,” says CEO Matthias Lapp. “In addition to the benefits for our customers, this will also open up growth opportunities for us in markets with great potential. As a result, the new location lost no time in taking up operations: work began in several shifts at the beginning of November, just two weeks after the opening.