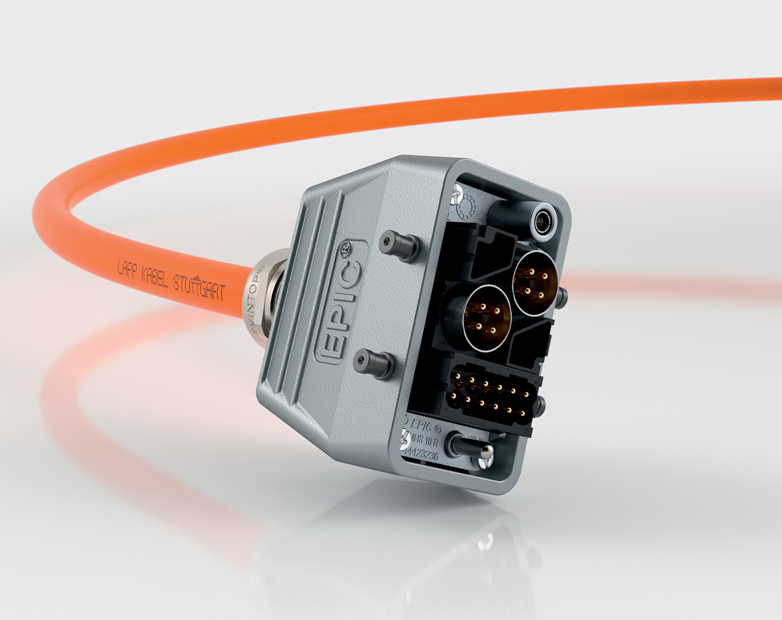 Flexibility, user-friendliness and robustness are vital criteria for industrial connection solutions. The Lapp Group stand at the SPS IPC Drives trade fair in Nuremberg reflects the importance of these factors. The technology leader for integrated connection solutions is showcasing its products from 22nd to 24th November at stand 258 in hall 6. Particular focus is on the newly developed modular connection system EPIC MH. The system allows users in a wide range of sectors to insert plug-in modules for energy, signals and data, and is also mateable with the market standard. There are also new connectors for the ÖLFLEX CONNECT SERVO family of servo assemblies, such as for the new generation of Siemens controllers or Fanuc drives. Lapp is also restructuring its portfolio of tailored assembly solutions for industrial applications in the HITRONIC family of optic cabling systems. In addition, Lapp is presenting new, highly dynamic drag chain cables and robust sensor/actuator cables, as well as the cable industry’s first anti-static cables.

EPIC MH: The new, modular, all-in-one connector system
Lapp’s new EPIC MH system is a modular, multi-frame connector that can accommodate any kinds of energy, signal or data modules. The mix of different functions makes the system extremely versatile. It is also mateable with the market standard. The EPIC MH system is therefore suitable for a range of applications, from robots and switchgear racks to renewable energy installations and machine and plant engineering. The system is also an interesting solution for rail transport. It is tested to EN 45545-2, requirements set R22 and R23, and meets hazard levels HL1, HL2 and HL3. The EPIC® MH will be available from January 2017.

More connectors for ÖLFLEX CONNECT SERVO
ÖLFLEX CONNECT SERVO is an important pillar of the Lapp Group’s strategy. In these servo assemblies, the cable and connector are connected semi-automatically, leading to advantages in quality and shielding effect. “The demand for system solutions is increasing, which is why we are expanding our ÖLFLEX CONNECT initiative”, said Georg Stawowy, Member of the Board and CTO at Lapp Holding AG. At SPS, Lapp will be adding two further versions to the range:
On the drive side, there is now also a connector for drives made by Fanuc, following on the heels of products complying with Siemens, SEW and Rockwell standards. It is first encapsulated using two different plastics and then injection moulded, allowing a more compact design and greater impermeability. The seal for the cable is integrated, meaning it cannot be lost during assembly and there are no screws. Together with the thin cables from Lapp, this allows for space-saving assemblies with smaller bending radii, especially for compact machinery.
In controllers, Lapp now offers the EPIC Motion Control, a connector for the new generation of booksize-format controllers from Siemens. This makes Lapp the only manufacturer to offer a cost-efficient alternative to Siemens products. The connector boasts state-of-the-art technology. The contacts on the ÖLFLEX CONNECT SERVO are semi-automatically crimped. This creates a connection that is extremely durable and gas tight, preventing oxidation at the contact.

ÖLFLEX CHAIN 90 P/CP high-end industrial cable
The new ÖLFLEX CHAIN 90 P/CP from Lapp’s extended line performance class is designed for use in constantly moving drag chains. The cable also has longer maintenance intervals, a highly abrasion-resistant and notch-resistant PUR outer sheath, and a special TPE conductor insulation that is flexible at low temperatures. This makes it suitable for both indoor and outdoor use, such as in industrial drives, wind turbines or electric vehicles, where limited spaces generally call for tight bending radii. It is extremely resistant to mineral oil based lubricants, UV and weather resistant, halogen free and highly flame retardant. On top of all that, the ÖLFLEX CHAIN 90 P/CP is UL/cUL certified, meaning that it is approved for use in North America, thanks in part to the increased operating voltage of 1,000 volts. The cable is available in an unshielded (P) or shielded (CP) version.

UNITRONIC ROBUST S/A for sensor/actuator cabling
Just as tough is the new UNITRONIC ROBUST S/A sensor cable for transmitting signals from sensors and actuators. It extends Lapp’s ROBUST family, which already includes control, Ethernet and bus cables. The ROBUST cables from Lapp show their strengths in the food industry, as well as in wet environments and outdoor applications where they are exposed to cleaning agents or bio-oils. The sheath resists both hot and cold water, and boasts a low moisture absorption rate. The temperature range is -50 to +90°C in a fixed installation and -40 to +90°C in mobile applications.

Anti-static cables complying with TRGS 727
A real treat on the Lapp stand – and an innovation in the cable industry – are anti-static cables. They provide greater safety in locations where sparks caused by static charges can lead to disasters, for example on oil drilling platforms, in refineries or when processing wood or flour. To prevent this from happening, Lapp has developed a power supply cable with an anti-static sheath. These cables are already being used on oil drilling platforms belonging to Norwegian service provider Aker Solutions. The sheath is made from a plastic with a special additive that increases conductivity. The composition and manufacture of the sheath material are both patent protected. The Lapp Group is the first manufacturer in the world to offer this kind of anti-static cable. Lapp can supply other cable types with this property upon request.