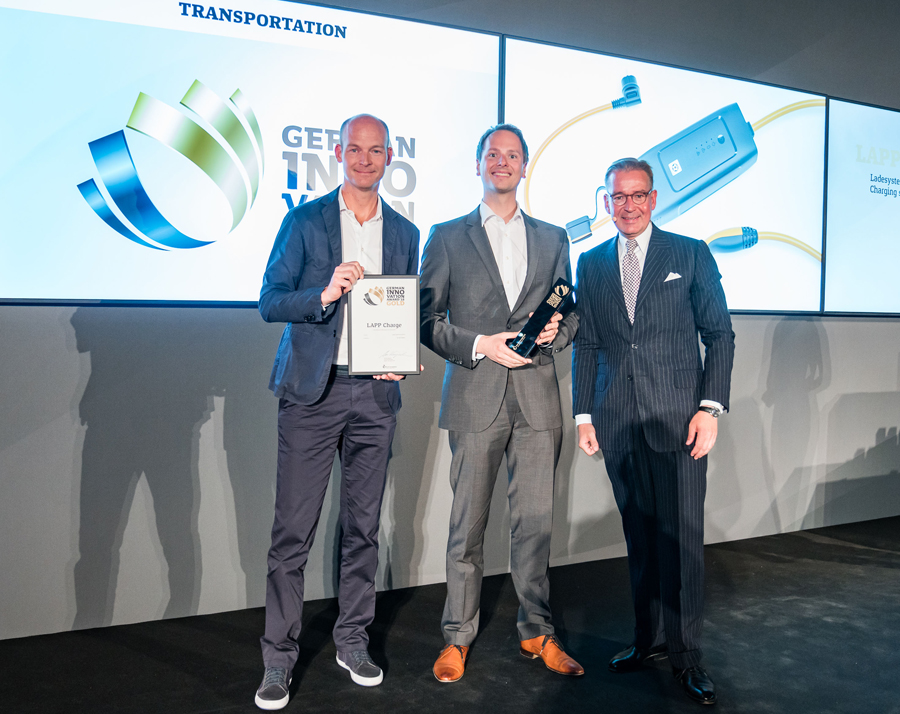 At the first presentation ceremony for the new German Innovation Awards, the Mode-2 charging system from LAPP scooped a gold award in the Transportation category. “This prize is a vindication of our strategy of basing everything on our customer’s requirements”, said CEO Matthias Lapp. “Part of this is that LAPP’s sophisticated technology is matched by a great design.”

The charging system is designed to enable car manufacturers to incorporate their own design and integrate it into the brand experience. LAPP is the first manufacturer to consistently adopt this approach – and its success is not only shown by the Innovation Prize win but also by the huge demand from car manufacturers. The Stuttgart design agency ID AID is responsible for the design of the charging system. ID AID has already developed several projects with LAPP, including charging systems for BMW.

The award for the Mode-2 charging system with IC-CPD (In-Cable Control and Protection Device) contributes to broadening the appeal of electromobility. To date, car manufacturers have tended to neglect charging from a domestic socket – known as Mode-2 charging – and viewed it as an emergency solution. This gap is precisely where LAPP has positioned itself with its charging system with IC-CPD, which features numerous technical innovations such as higher charging currents and electrical protection functions. An interchangeable power cable enables the charging system to be charged from domestic or CEE sockets worldwide, with a power up to 11 kW, temperature monitoring features, and automatic detection of the maximum charging current. Locking the mains cable on the box, where a sliding mechanism enables it to be intuitively released in just two steps, is a great example of how form and function have been combined. This is what the German Innovation Award is all about, assessing criteria such as functionality and operability, design quality and level of innovation.

“LAPP Charge makes charging electric vehicles from standard domestic sockets in Germany, Europe and beyond not only more technically reliable, but also much more convenient. It’s a long overdue product that sets new standards for Mode-2 charging systems and gives electric vehicle drivers the confidence that they can extend their usage radius into other countries”, was the verdict of the jury.

The German Innovation Award is presented to products and solutions across different industries that distinguish themselves from previous solutions, primarily in terms of user focus and added value. Why? Innovations that shape the future and improve life can be found in all industries. Sometimes you can see them at a glance, but often you cannot. The German Innovation Award is aiming to change that. It promotes excellent developments to a broad public and supports successful positioning.

It is presented by the German Design Council. Established by the German parliament and funded by German industry, the Council is an independent and internationally active institution to promote competitiveness of companies. With its competitions, exhibitions, conferences, courses and publications, it makes a crucial contribution to knowledge transfer in the field of design.