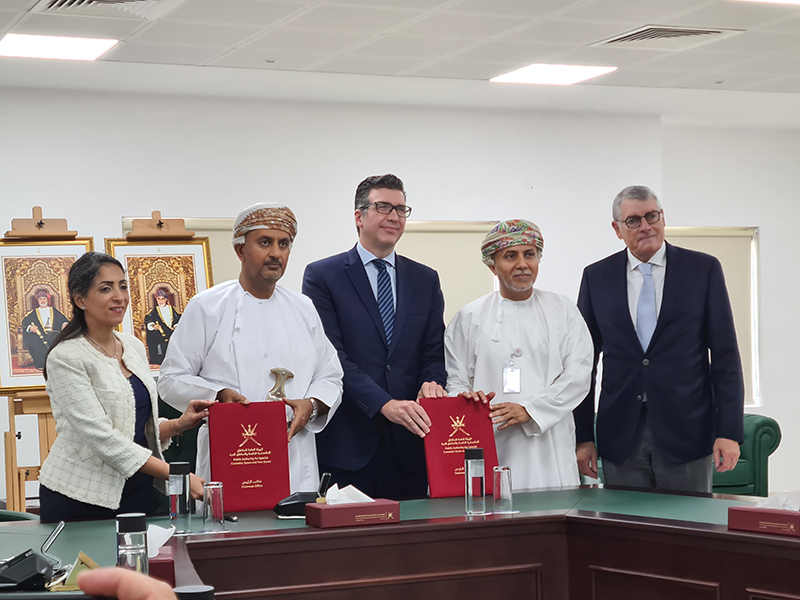 The HYPORT Coordination Company, a joint venture between DEME Concessions and OQ Alternative Energy, has signed a second land reservation agreement for a green hydrogen and ammonia production plant with the Public Authority for Special Economic Zones and Free Zones (OPAZ) in Duqm, Oman.

On 15 June, the agreement was signed by Martin D’Uva, Managing Director of DEME Concessions and Deputy Chairman of the HYPORT Coordination Company, Najla bint Zuhair Al Jamali, CEO of OQ Alternative Energy, and Dr Ali bin Masoud Al Sunaidi, OPAZ Chairman.
​
​HYPORT Duqm is a strategic project, located close to the Port of Duqm, that will develop a green hydrogen and green ammonia production facility with a 500MW electrolysis capacity on a site of 793,000 square metres. The hydrogen plant will be fed with renewable electricity produced by approximately 1.3GW of combined installed capacity from wind turbines and solar panels established in the Special Economic Zone at Duqm’s renewable energy area, where HYPORT Duqm has been allocated an area of 150 square kilometres.
​
​1.3GW of renewable electricity

​The HYPORT Duqm project is founded on three main components: a solar and wind park with a total installed capacity of about 1.3GW, a dedicated, high-voltage green electricity transmission line, and a utility-scale electrolysis and ammonia conversion plant, where hydrogen will be produced from desalinated water and subsequently converted into green ammonia, which will be stored and shipped from the Port of Duqm to the target export markets.
​
​In October 2021, HYPORT Duqm installed and commissioned four meteorological masts on its site and two solar stations measuring solar radiation levels as part of a one-year measurement campaign.
​
​First utility-size green ammonia plant

​Commenting on the signing of the agreement, Martin D’Uva, Managing Director of DEME Concessions, said: “With this second land reservation signed, HYPORT Duqm is ready to go into the next phase and one step closer to becoming the first utility-size green ammonia plant in the SEZAD, the biggest special economic zone in the Middle East. Together with our partner OQ, and with the Public Authority for Special Economic Zones, we are proud to be contributing to one of the key vectors to facilitate the energy transition and to the ambitions of Oman to become a world player in green molecules. The green ammonia, produced by our flagship project HYPORT Duqm, will be shipped via the strategically located Port of Duqm to customers in Europe and other markets where green molecules will play a crucial role to support the key objectives ‘energy security’ and ‘mitigation of CO2 emissions’ from hard-to-abate sectors.”

​Najla bint Zuhair Al Jamali, CEO of OQ Alternative Energy, stated: “The midstream land reservation will enable us to perform the necessary studies and design works in order to take the project from feasibility to detailed engineering. We would like to thank OPAZ for their continued support in ensuring the success of HYPORT Duqm.”

​Engineer Yahya bin Khamis Al-Zadjali, in charge of managing the operations of the Special Economic Zone, said: “This agreement is a significant step forward in enabling the project to complete its necessary studies on the land such as soil and topographic studies in support of the project’s engineering phase. OPAZ looks forward to working with the project team to complete these studies and start the project as it is Duqm’s first green hydrogen and green ammonia project, which in return will allow OPAZ to attract other renewable energy-based projects such as green steel and green aluminium production facilities so as to keep pace with the growing global demand for renewable energy.”