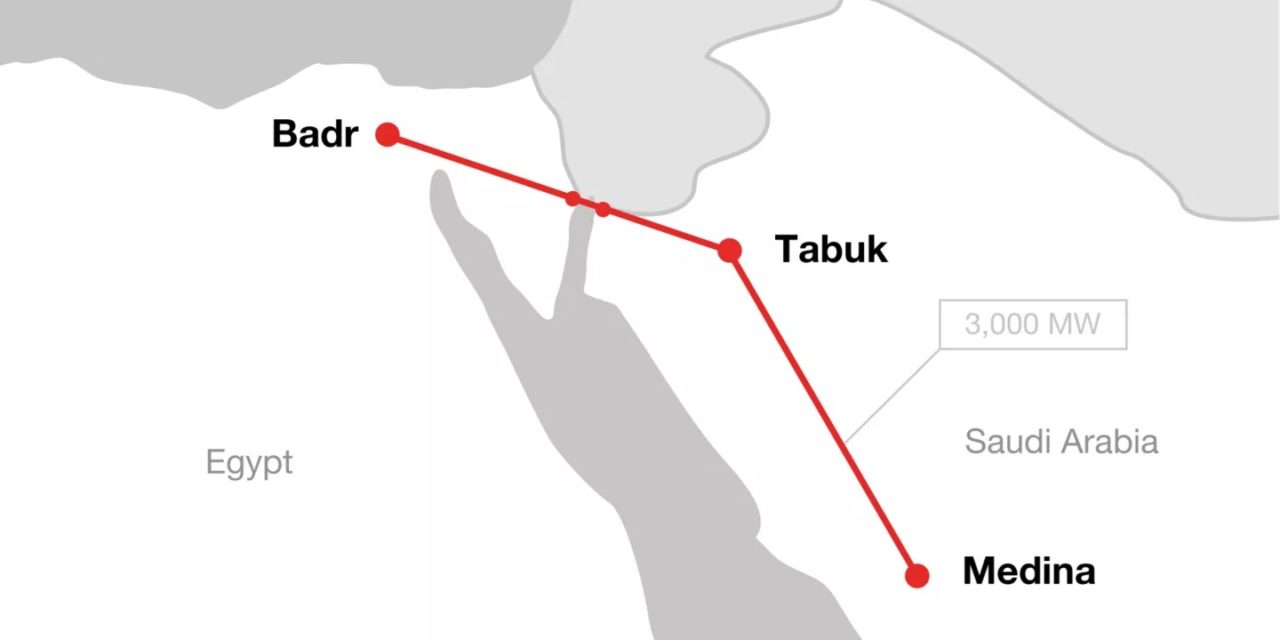 Hitachi ABB Power Grids is the lead in a consortium that has been awarded a major contract worth several hundreds of millions of US dollars from the Saudi Electricity Company and the Egyptian Electricity Transmission Company. The award is for the first-ever large-scale HVDC interconnection in the Middle East and North Africa, enabling the Kingdom of Saudi Arabia (KSA) and the Arab Republic of Egypt to exchange up to 3,000 MW of electricity – much of which is expected to be generated from renewable energy sources in the future. The connection will support the flow of power in multiple directions between three terminals and will be the first interconnection allowing the exchange of electric power between both countries.

The global technology and market leader will be delivering advanced technologies for the high-voltage direct current (HVDC) power link between the countries. This includes the supply of three HVDC converter stations located at Medina and Tabuk in KSA and Badr in Egypt. The business will also be providing system studies, design and engineering, transformers, valves, high-voltage equipment, technical advisory, commissioning and service, in collaboration with two consortium partners – Saudi Services for Electro Mechanic Works in KSA and Orascom Construction in Egypt.

The HVDC link will give Egypt access to the interconnected power grids of the Arabian Gulf, and KSA access to those of North Africa, whilst strengthening grid resilience and power supply security. Both countries have ambitious carbon-neutrality targets. The Kingdom of Saudi Arabia is working to increase the share of natural gas and renewable energy sources to approximately 50% by 2030, and the Arab Republic of Egypt intends to increase the supply of electricity generated from renewable sources to 42% by 2035. The connection directly contributes to the realisation of these goals. The in-country value of the investment is significant, generating new jobs and knowledge transfer for people in KSA and Egypt.

H.R.H. Prince Abdulaziz Bin Salman – Saudi Minister of Energy – unveiled that reaching such a milestone highlights the sound directives and proper guidance paid by the two brotherly countries, significantly represented by the Custodian of the Two Holy Mosques – King Salman bin Abdulaziz Al Saud and His Excellency President Abdelfattah Al-Sisi. Among a package of economic, development and political agreements accorded by the two countries, the MOU came to light, strengthening KSA’s and Egypt’s prosperous cooperation in interconnecting their power grids.

H.R.H. Minister of Energy pointed out that the electrical interconnection plans in Saudi Arabia comply with Vision 2030, enjoying due care from His Royal Highness Prince Mohammed bin Salman, Crown Prince, Deputy Prime Minister and Minister of Defense. Leveraging its strategic location while optimising its ownership to the largest power grid in the Middle East and the Arab world, KSA aims at being a regional hub for energy exchange and a prominent trader in the market.

H.E. Egypt’s Minister of Electricity and Renewable Energy, Dr. Mohamed Shaker El-Markabi, affirmed that the project reflects the depth of Egyptian-Saudi relations throughout their rich history and the wise leadership of both countries. El-Markabi also highlighted the unceasing endeavours of Egypt & KSA to attain sustainable social and economic goals across the entire Arab world. He affirmed that such joint interconnection is a kick-start for a pan-Arab interconnection, complementing their visions towards 2030.

Egypt’s Minister of Electricity and Renewable Energy added that the robust connection between two of the largest electrical networks in the region, promise stability and reliability on power supply, with a thrive in the economic and developmental returns on exchanging around 3000 megawatts of electricity.

Exhibiting their fruitful expansion plans for renewable energy resources, such cooperation is considered as a safety valve for the unstable nature of renewable energy. Huge investments shall be dedicated in the near future to address such unsteady nature.

“The clean energy transition is one of the most urgent and important challenges of our times and we must innovate and collaborate to accelerate our carbon-neutral future,” said Claudio Facchin, CEO, Hitachi ABB Power Grids. He continued, “We are proud to have the opportunity to work with our esteemed customers and partners in the Kingdom of Saudi Arabia and the Arab Republic of Egypt for this prestigious project. At Hitachi ABB Power Grids, we are enabling interconnections between continents, with unique capability to reliably exchange electric power at scale, across borders and time zones.”

In the longer term, the link has the potential to be part of a more broadly interconnected energy system with Europe and the eastern Mediterranean, allowing the exchange of solar power from the south and east with wind and hydropower from the north.

The HVDC interconnection will transport up to 3,000 MW of electricity at 500 kV along 1,350 km using overhead power lines and a subsea cable across the Red Sea. The power will be able to flow in multiple directions between the three terminals – for instance, from Tabuk to Badr, but also simultaneously from Tabuk to Medina. With the state-of-the-art MACH™ control system, the power flow can be controlled and reversed between the stations without interrupting the continuous power flow, providing maximum flexibility, grid resilience and supply security to both countries.

HVDC is a key enabling technology of the sustainable energy transition, and Hitachi ABB Power Grids is continually adding new capacity to meet the growing demand for HVDC solutions globally. For example, Hitachi ABB Power Grids was involved in the go-live of the North Sea Link that was put into commercial operation earlier this month. At 720 km, North Sea Link is the longest sub-sea electricity cable in the world connecting Norway and Britain’s energy markets enabling the exchange of renewable power between the countries. Hitachi ABB Power Grids pioneered commercial HVDC technology almost 70 years ago and has delivered more than half of all the HVDC projects in the world.