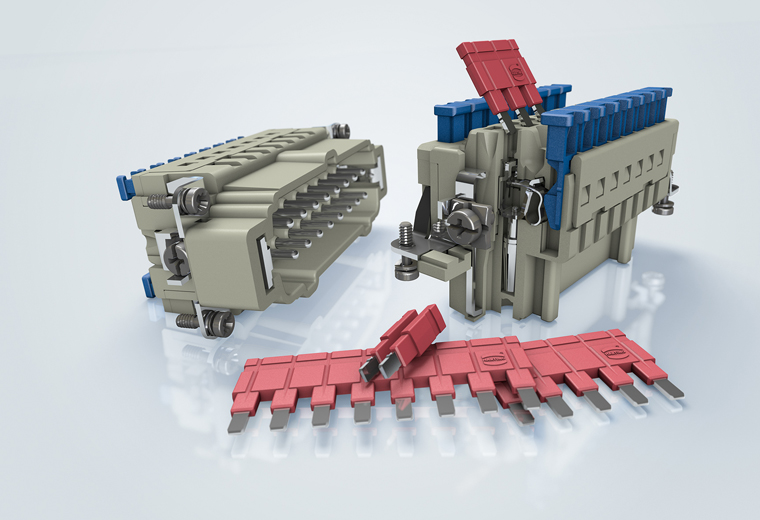 Interlinked cabling of decentralised control cabinets in a modern factory/ production line environment often creates situations where multiple contacts need the same potential (e.g. Ground or 24V), for example when providing connections for sensors, switches and Powerbus daisy chaining.   In such cases, Han® Multipliers allow for the use of a single feeding line instead of multiple feeding lines of the same potential.  For example Han® Multipliers are particularly useful for connecting motor drives/inverter control wiring in either star or delta connection arrangements.

HARTING Han® Multipliers, which are simply pushed onto the appropriate equipotential contacts, can therefore significantly reduce both labour and material costs and installation times by simplifying connections.

There are several standard connector types within the HARTING range that can accommodate these multipliers, including Han-Yellock® – an IP67 compliant, smoothly contoured design with single-handed push button mating that supports cable-trunking drag-through installations. Inserts can be loaded from the front or rear side of a bulkhead panel.  Multipliers are available in various types, such as 3:2, 2:3 etc., up to 5 way size and loaded from the front mating side of the insert.

HARTING has also recently developed a separate single 15 way Han-Yellock® Multiplier Block insert, based on its 16A rated Han E® crimp contacts, which can also be fitted with the full range of Han-Yellock® Multipliers.  The key feature of this particular insert is that it will also fit into HARTING’s Han-Modular® system concept.