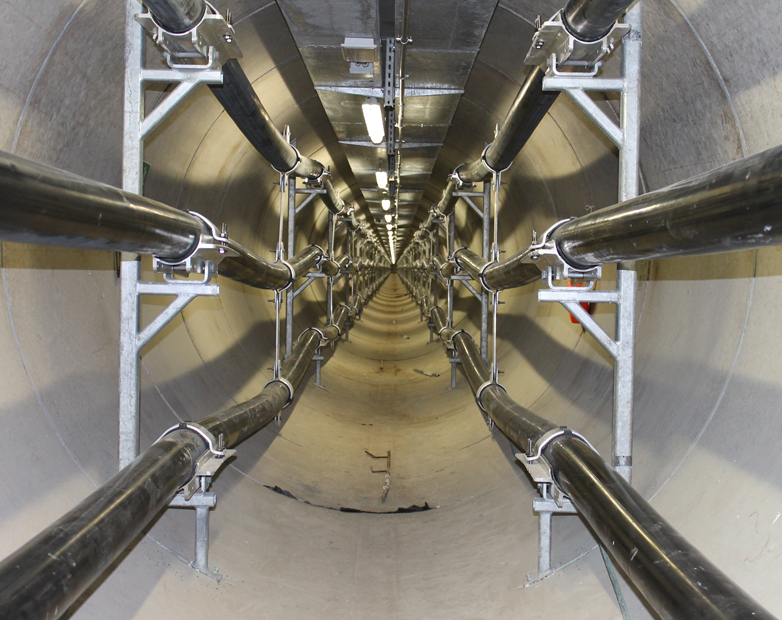 Centaur cable saddles designed and manufactured by the world’s leading cable cleat manufacturer, Ellis have been installed to secure two separate high voltage (HV) cables in a power tunnel in the West Flemish region of Belgium.

The Stevin project, which when complete will feed the Belgian interior with wind, solar and other forms of renewable energy generated in this coastal region of the country, is being undertaken by Belgium’s electricity transmission system operator, Elia. The renewably sourced power is carried through the tunnel by Nexans and Silec 380KV / 3,000 megawatt cables, which are installed on opposite sides of it, and secured by Ellis’ Centaur saddles.

Tony Conroy, Ellis’ global sales director, said: “Stevin is a huge project for Belgian power generation, and one that really does enhance the country’s standing in terms of the availability and consumption of renewable energy.”

“Therefore, having our products specified for such a vital element of such a high-profile project bears testament to both the work being carried out by our local distributor, NBR Nussbaumer; and the reputation we’ve earned over the years as the experts when it comes to cable cleats and the protection of cables in short-circuit scenarios.”

Ellis’ Centaur cable saddles are heavy-duty, extruded aluminium saddle cleats that were initially designed and developed by the company in response to a serious safety issue surrounding the restraint of high voltage cables up to 400kV with a diameter range of 100 to 160mm. They have been used extensively in power tunnel projects, including the London Power Tunnels project, the Woodhead Tunnel in the Peak District National Park and the Venda Nova III Cable Tunnel in Portugal.

“The Centaur cable saddle is the kind of innovation we pride ourselves on,” continued Tony. “We designed, developed and tested it at a time when there was nothing on the market guaranteed to secure cables of the size being used in the Stevin project, and have since seen it develop into the first choice product for power tunnel installations around the world.”

For additional information on Ellis and its Centaur cable saddles visit www.ellispatents.co.uk or call +44(0)1944 758395.