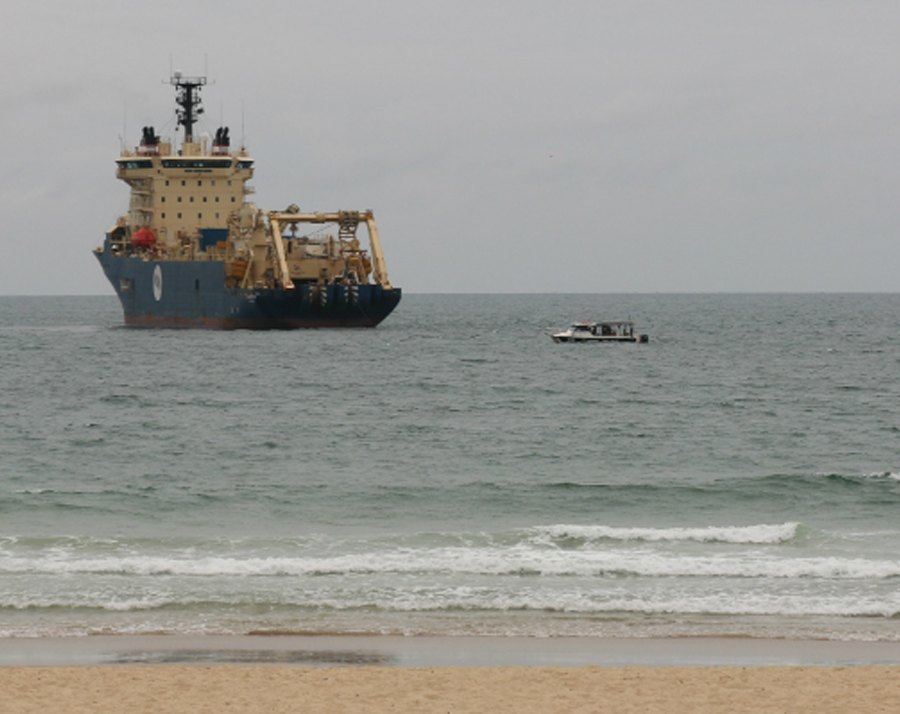 Queensland’s first direct international data and telecommunications connection to global markets is on track for mid-2020, with the undersea fibre optic cable being pulled ashore on the Sunshine Coast.

The Ile De Brehat, the large vessel that has been seen off Maroochydore Beach since last week, has now delivered the 550 kilometres of cable to connect the Sunshine Coast to the 7000 kilometre Japan-Guam-Australia South (JGA-S) submarine cable.

The off shore installation involved the use of excavators, winches, boats and divers. The cable was pulled ashore at Maroochydore from 7am this morning.

The cable, which is laid on or buried under the sea floor, will connect to the cable landing station adjacent to the Maroochydore City Centre project.

Mayor Mark Jamieson said the project had reached another major milestone and would deliver Australia’s fastest telecommunications connection to Asia from the East Coast.

“Today’s arrival of the cable laying vessel can reassure our community that the delivery of the international submarine cable connection is on track to be operational in mid-2020,” Mayor Jamieson said.

“In preparation for the submarine cable coming ashore, Sunshine Coast-based business Auscom has installed underground cable between the beach landing and the cable landing station.

“The cable landing station will soon house the connection point for the international submarine cable with landside communication networks and has the capacity to cater for four submarine cables and houses 24 data cabinets.

“We will have an extraordinary capacity to accommodate fast, reliable transfer of data across the world.

“Works have also been completed on the horizontal directional drilling required to facilitate the landing of the cable.

“Once the network is operational in mid-2020, the Sunshine Coast will provide the fastest international connection point from Queensland and eastern Australia.”

“The cable will be able to provide Australia’s fastest data and telecommunications transmission speeds from the eastern seaboard to Asia and the second fastest to the US.

Mr Dick said an independent assessment commissioned by Sunshine Coast Council found the project could lead to an estimated 864 new jobs in the Sunshine Coast region and could generate $927 million for Queensland’s economy.

“This is huge investment in the future for this fast-growing part of our state, and once delivered will be the only international cable landing on the Australian east coast outside of Sydney,” Mr Dick said.

Mayor Jamieson acknowledged the $15 million contribution from the Queensland Government’s Jobs and Regional Growth Fund in helping make this investment-generating project a reality.

“In the future, the Sunshine Coast will be at the top of the list when companies needing big data consider where to set-up in Queensland and Australia,” Mayor Jamieson said.

“Once again, our council is at the forefront of thinking outside the square, securing new revenue sources and pursuing opportunities to generate economic and employment growth as a major dividend for our residents, ensuring we continue to be Australia’s healthy, smart, creative region.”

Connecting the submarine cable to the cable landing station in Maud Street, Maroochydore requires the Peirce Park car park (corner of Alexandra and Melrose parades, Maroochydore) to be temporarily closed until December 24, 2019.