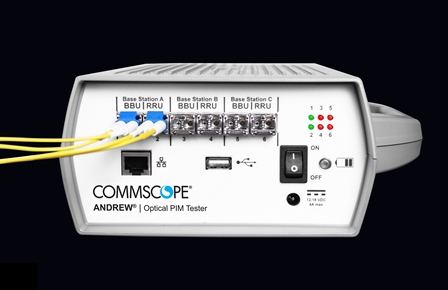 CommScope continues to drive innovation in the wireless industry with its Optical PIM Tester, making it more capable of finding passive intermodulation (PIM), interference that can cripple the performance and throughput of modern networks.

PIM is one source of wireless network interference that can result in significantly degraded voice quality, dropped calls and reduced data throughput. The effects of PIM can be drastic. Just a one decibel drop in uplink sensitivity due to PIM can shrink the wireless coverage area by 11 percent.

To make it easier to find PIM caused by signal interaction between multiple frequency bands, CommScope added a cross-band PIM testing capability to its revolutionary Optical PIM Tester, which it believes is an industry first via Common Public Radio Interface (CPRI). The Optical PIM Tester injects test signals into the base station’s downlink—now even between frequency bands—to identify PIM products in its uplink, which engineers can then remediate.

CommScope also significantly reduced the PIM tester’s size and weight, making it easier to transport. The enhanced features and functionality of the Optical PIM Tester ready it for inclusion in wireless operators’ standard network acceptance and preventative maintenance processes.

“CommScope has benefitted from and responded to excellent feedback from customers, who suggested ways that the Optical PIM Tester could be even more useful to them,” said Paul Bell, senior vice president, CommScope. “We took these suggestions back to the lab and gave the PIM tester a makeover, making it even better equipped to pro-actively find PIM products instead of waiting for them to appear.”

Judges for the LTE North America Awards 2015 took all these new capabilities into consideration when they recently named the Optical PIM Tester a finalist in the ‘Best Test/Measurement Solution’ category. Award winners will be announced at a ceremony on November 18 during the eighth annual LTE North America summit. The North Carolina Technology Association also named the Optical PIM Tester an awards finalist in the ‘Communications Technology’ category and will announce contest winners on November 12.

Introduced at Mobile World Congress 2015, the Optical PIM Tester enables a single technician to directly connect to the base band unit at a cell site and perform an active PIM test over CPRI, removing the need for climbing the tower. Since then, CommScope has successfully completed product trials with major US operators. The Optical PIM Tester is available now to North American wireless operators, and CommScope expects to make it available to European network operators in early 2016.

A Whole New Way to Test for PIM

It All Comes Back to PIM

Get a Jump on PIM