CommScope Celebrates 25th Anniversary of Innovation at its Claremont Facility 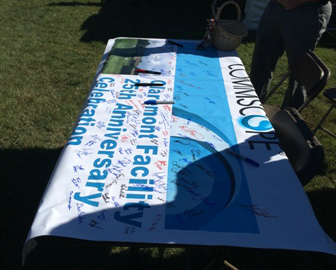 Since CommScope’s manufacturing plant in Claremont, N.C. opened in 1990, it has produced enough cable to travel to the moon and back about 18 times. In its 25-year history, the facility has not just manufactured cable, but it has evolved to manufacture innovative and standard-setting solutions to meet the ever changing needs of the network infrastructure industry.

That evolution contributed significantly toward making CommScope into an industry leading network infrastructure provider, and much of the company’s success can be traced back to the research and innovation in the Claremont facility.

“The Claremont facility has been at the center of CommScope’s networking infrastructure manufacturing since 1990,” said Eddie Edwards, president and chief executive officer, CommScope. “Since the facility opened 25 years ago, the industry has changed. To evolve as a company, this facility had to evolve as well.

“CommScope is thankful for the Claremont employees that continue to deliver superior technology, solutions and services to our customers and partners.”

When Claremont first opened, it manufactured such items as unshielded twisted pair (copper telephone wiring), television receive-only cables (used for consumer satellite reception) and personal computer cables. As the industry evolved, Claremont’s role has evolved as well. The facility was expanded four times to keep up with increased network infrastructure demands. CommScope’s research and development has stayed ahead of the industry needs by developing structured cabling solutions that would later become industry standards.

Today, Claremont is one of CommScope’s main manufacturing and product development facilities for its broadband and enterprise divisions. Employees produce twisted pair, fiber and coaxial cables for use in data center and enterprise network architectures as well as cable television and wireless networks. This ISO14001 certified 583,000-square foot facility employs more than 600 people and it produces more than 2 billion feet of cable every year—enough to circle the earth 14 times.

“The start-up of the Claremont site in 1990 was perfectly timed to the early days of the structured cabling systems industry,” said Kevin St. Cyr, senior vice president of Enterprise Solutions, CommScope. “That foresight into what the industry will need in the future has led CommScope to become standard setters.”

St. Cyr added that CommScope developed 10 Claremont-manufactured solutions that were later adopted by the industry as structured cabling standards. For example, CommScope introduced SYSTIMAX® PDS cabling in 1985 and it was later adopted as the Category 3 cabling for uses in telephone lines. Other examples include:

“Certainly, the industry has evolved in terms of bandwidth requirements. Along the way, the Claremont site has stayed ahead of the performance curve developing, producing and shipping copper and fiber-optic solutions to customers around the world,” St. Cyr added.

Edwards added that the demand for CommScope solutions continues to be driven by the rapid growth of data traffic and need for bandwidth from the ongoing adoption of smartphones, tablets, machine-to-machine communication and the proliferation of data centers, big data, cloud-based services and streaming media content.

“CommScope enables communication through a constant focus on innovation, agility and integrity,” Edwards said. “We continue to drive innovation in networks and technologies with high-performance, high-quality products and many of those products are manufactured here in Claremont.”