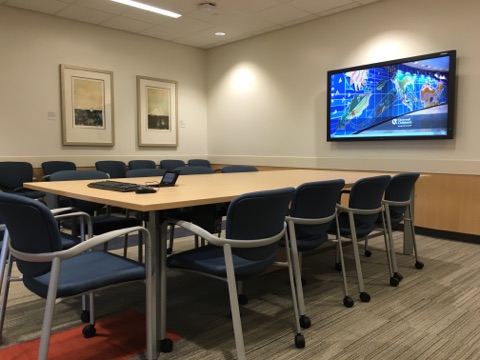 Connectrac announced today that in the construction of Cincinnati Children’s Hospital’s brand new Research Tower, cable management capabilities were installed throughout the entire property with the assistance of Connectrac Wireways.

At around 445,000 square feet, the building sits between a companion research tower and the hospital, and is home to over 1,500 physicians, scientists and staff. Throughout the new research tower, the hospital created a variety of A/V Meeting Rooms able to seat and accommodate as many as 30 people. Each meeting room moved away from the standard projector set-up by using flat-panel, wall-mounted displays, along with conference phones and personalized Crestron Flip-Tops placed on top of every conference table. The Crestron Flip-Tops bring controls for lighting and video inputs to a touch screen.

Each meeting room would require every kind of connectivity—A/V, Telecomm, Power and Data. For a project of such a large scale, the hospital wanted a quality product that could be matched with an affordable price.

“To core drill everywhere is simply too much,” said Michael Rose, Interactive Services at Cincinnati Children’s Hospital. “We had no problem with Connectrac. It solves a lot of problems.”

After being selected by their architect firm, the hospital made an order for Connectrac In-Carpet wireways to be installed in their A/V Meeting Rooms. Having not seen the product before, Rose was a little skeptical when he thought about other on-floor type raceways.

“I’m usually hesitant about using any type of surface solution, but you don’t even know it’s there. It works great,” Rose recalled. “If you have to make a change or forgot something, you just pop the cap and make your change,” he added.

What alleviated his concerns was simply seeing Connectrac being put into action. The install team had no problems laying the track down, putting In-Carpet wireways in over 40 A/V Meeting Rooms. The wireway was laid seamlessly from the wall underneath the flat-panel display to underneath the conference table, providing cable management for the Crestron Flip-Top. Not only did the subtle, elegant aesthetic appeal to Rose and the staff, but the flexibility to change any cabling within the Connectrac wireway made it even more invaluable.

The installation and overall construction of the new research tower adds to the hospital’s already extraordinary resume. Named one of the nation’s best children’s hospitals by U.S. News, Cincinnati Children’s ranks top 10 in 10 specialty categories, including #1 in pulmonology and #2 in cancer care and nephrology. It also earned recognition from Parents Magazine as the #3 best children’s hospital in the United States. Such a renowned status made Connectrac excited to provide cable management throughout the hospital’s new research tower.

“The acclaim and achievements the hospital has earned in its existence is nothing short of spectacular,” said Clint Strong, CEO of Connectrac. “This new research tower will only lead to more discoveries and accomplishments within the medical field. We are happy to play a small role in bringing connectivity to such an innovative establishment.”