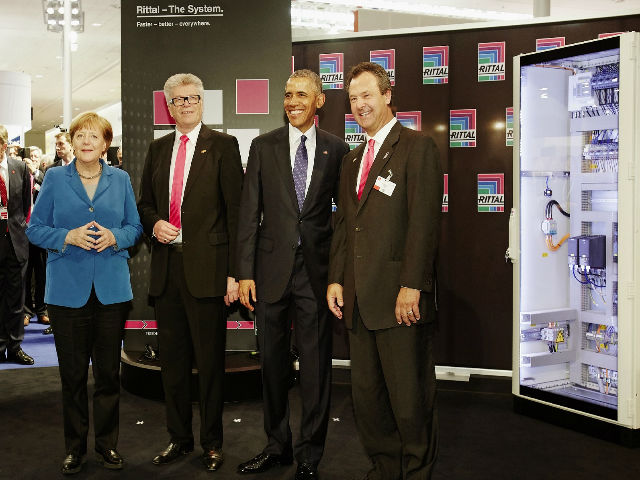 US President Barack Obama and German Chancellor Angela Merkel paid tribute to the extraordinary innovation and commitment to future talent development shown by the Rittal company during a state visit this week.

Both the corporation’s new “Blue e+” generation of cooling units – which set new standards for energy efficiency – and its ongoing investment in young trainees impressed the President and Chancellor Merkel on the opening day of the Hannover Messe 2016. The USA was selected as this year’s partner country for the Hanover expo, which is now the world’s leading trade fair for industrial technology.

Rittal currently equips some of the largest data centres in the world. “We are Europe’s number one provider of engineering software, and we want to keep on growing,” says owner and CEO Dr. Friedhelm Loh, who also highlighted to both leaders them importance of software and data in future industrial production.

The US President showed considerable interest in the new Blue e+cooling unit, commenting at one point; “This is a fine company!”

Rittal in the United States

Rittal has set ambitious goals for itself in the United States with plans to double its sales in this important market over the next few years.

“We have been active in America for more than 30 years, and are particularly proud that 85 percent of our products are made in the USA”, stressed Gregg Holst, President of the Rittal Corporation in the United States.

Rittal currently employs 750 members of staff at its US operations, which are headquartered in Chicago.