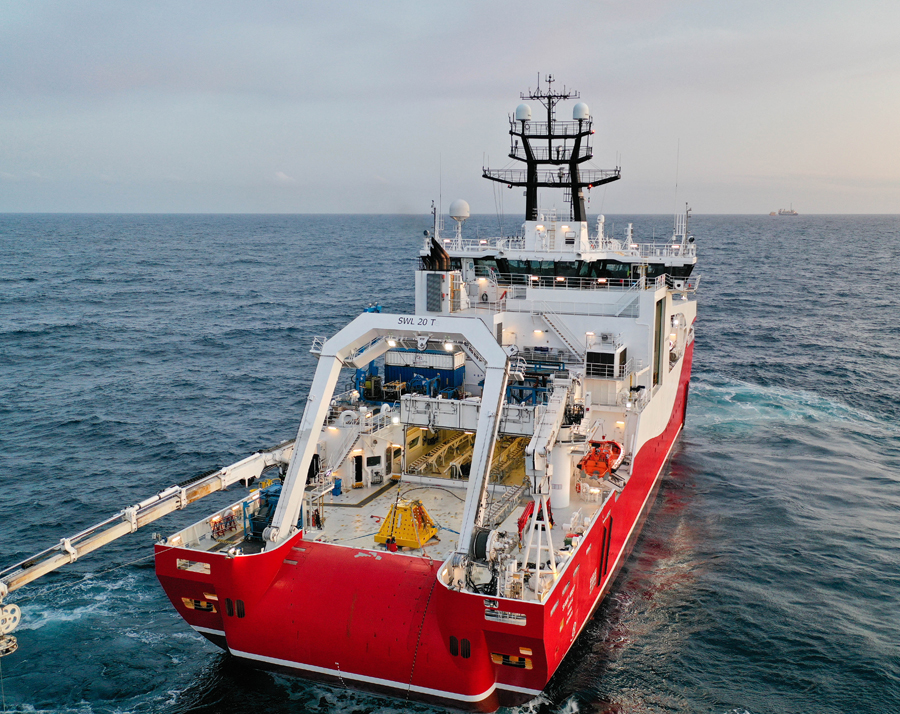 Alvheim was already connected to Tampnet’s network, but this was via a lower capacity radio link from the Heimdal platform, which will be de-commissioned in 2021.

Lead Engineer OCT at Aker BP, Ingve Guttorm Lode explains that the deployment will enable Alvheim to particpiate in the digital transition which is driven by the Aker BP EUREKA program for digitalization.

“This is a very stable connection with high redundancy that will secure the best possible up-time for our operations. With the fibre optic cable’s massive capacity and low latency, we can now explore and test various applications to optimize production onboard”, Lode said.

A special solution
Tampnet’s Project Manager, Eivind Sangesland has been onboard the installation vessel for the past week to supervise the finishing touches of the installation. He points out that it is a special solution that Tampnet has delivered in this project in close cooperation with Aker BP and Subsea7 through their alliance.

Sangesland explains that Tampnet and Aker BP started the project last year with divers from DSV Seven Falcon installing subsea connectors to provide Alvheim with an optimal interface for the fibre cable connection. This summer, a cable tail installed on Tampnet’s existing system between Heimdal and Mariner was picked up and a new 8 km long cable was laid to Alvheim where it was connected to a CEM (Cable End Module) and deployed to the seabed below Alvheim by the CLV Seaway Aimery.

4G coverage during operations
In preparation for the offshore campaign, Tampnet’s NOC (Network Operations Centre) prepared the installation vessel with equipment to allow 4G LTE coverage while working out in the field. From the cable lay vessel Seaway Aimery, the 4G LTE coverage enabled the crew and project team onboard to communicate seamlessly through services demanding high bandwith such as video conferencing and screen sharing, and proved beneficial from an operational perspective in planning vessel and testing operations in proximity to the Alvheim FPSO.

About Aker BP Aker BP is a fully-fledged E&P company with exploration, development and production activities on the Norwegian Continental Shelf (NCS). Measured in production, Aker BP is one of the largest independent oil companies in Europe. The company is headquartered at Fornebu outside Oslo and has offices in Stavanger, Trondheim, Harstad and Sandnessjøen.

Aker BP is listed on Oslo Børs under the ticker “AKERBP”.